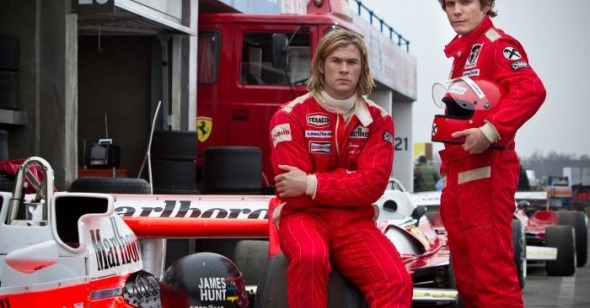 Out of Gas
By Julien Allen

One of the regrettable side effects of living in a global technological age, with greater transparency and ostensible enlightenment than ever before, is the rapid development of our capacity as a species to “settle for less.” Our increasing propensity to question, criticize, and hold everything to account hardly drives standards up; rather, it seems the more we know and learn of the world’s inadequacies, the lower our expectations become. If this fatalism applies to matters of great import, such as our politicians (we no longer really expect competence or reliability and are merely grateful when they are not corrupt or felonious), and our newspapers (conceding that our right to expect “news” is compromised by the cutthroat necessities of market forces, we dutifully scarf down the gossip and PR slops instead), it stands well to reason that the same should affect our appreciation of Hollywood movies.

As much as most of us can point to Hollywood for the films that made us fall in love with the cinema, there have always been and there will always be bad movies, and a resigned acceptance of this truism should not be an excuse to identify the least worst of them and start busting out the superlatives. The positive critical reactions to Ron Howard’s Rush constitute just such a depressing case in point. This causes concern not because the film is mediocre (although it is) but because of the sheer distance our critical goalposts appear to have moved to accommodate it. What is more unforgivable than the dilatory, cynical waste of talent dribbling off the screen in Rush is that some critics appear to have fallen for its superficial charms (period cars! sex! third-degree burns!) and are content to overlook its structural deficiencies, not to mention its fundamental pedestrianism. This is a kick in the teeth to the legitimate artists in the industry (Tarantino, Fincher, and Cuarón fall off the tongue, but there are scores more) who are working their socks off, for better or worse and with varying degrees of success, to submit something genuinely enriching and memorable in return for our Saturday night $15.

Where to start with Rush? An examination of its merits would paint no more of an accurate picture of the film than the film does of its subjects, partly because the more merits one realizes it has, the more frustrating the overall experience is. It’s only fair to recognize that Rush has two clear things working against it—the curse of the biopic and the curse of the sports film. But it also has the resources to have potentially overcome both. Peter Morgan, writer of Frost/Nixon and The Queen, has proven himself adept in the past at homing in on a specific (and usually very short) period in history, rather than attempting to dramatize famous people’s lives from birth to death, an endeavor which dooms almost every biopic on the roster. And whilst sports may barely ever work on screen, car chases certainly do—and Rush has cinematographer Anthony Dod Mantle at the wheel to bring his Slumdog sheen to the racing footage, the film’s biggest calling card to audiences who know little and care less about a pair of mismatched European F1 drivers from the 1970s.

The drivers in question are the methodical Austrian genius Niki Lauda (Daniel Brühl), one of the all-time legends of car racing, and nonconformist Englishman James Hunt (Chris Hemsworth), a popular and gifted ‘flair’-driver whose career was far shorter and less garlanded, but whose six-year rivalry with Lauda forms the basis of the film’s plot. Interviews with Lauda himself (Hunt having died in 1993 of a heart-attack, aged 45) provided much of the source material, revealing in particular Hunt and Lauda's chalk-and-cheese approach to the sport itself.

The racing sequences are expertly realized and, if you excuse the distractingly obvious CG at key moments, exhilarating . . . but then, none of the Fast and the Furious films have, as far as I know, premiered at the Toronto Film Festival. A close aesthetic sibling is the video game Need for Speed: Most Wanted, from which the film’s multi-car sequences and meteorological special effects are sometimes hard to distinguish, so obviously are they derived from the same basic computer technology. The trouble is, everything off the track (and everything that is meant to make what is on the track meaningful, as opposed to just exciting) is just so fist-clenchingly, gear-grindingly false. And Peter Morgan’s script (though we could be charitable and assume his original effort was put through a wheat thresher) is at the heart of everything about the film that doesn’t work.

There were surely more, but I can recall only one single line of dialogue in the entire 125 minutes which didn’t constitute either a direct quotation from a press conference, a pompous statement about the appeal of racing or the talent of one of the two protagonists, or—most frequently and infuriatingly—a piece of clunkingly transparent exposition or narration just so the audience can be kept up to date, as if the facts were anywhere near as interesting as the characters could have been if they had been given time to breathe. The untarnished line of dialogue in question—“fuck that,” which Hemsworth utters near the end of the final race in response to his pit boss’s entreaty to go slow—makes for a surprisingly jubilant moment, operating as an authentic release from the unremitting torture of having one race situation after another described to us in multiple formats (bad TV journo, unconvincing commentator, scoreboards and ticker); being force-fed thick dollops of exposition camouflaged as idle chatter (as if we really needed to be told four times that Lauda bought his first ride for Ferrari with his own money); and having stubbornly disposable characters—usually one of the cast of the British sitcom Green Wing, in a terrible wig—who serve no other purpose than to walk into frame and describe the historical situation as if they were ordering a drink: “Lauda’s the best at setting up the car”/”You’ll never win the title with Jacky Ickx”/”The show’s over, we have no money.”

In one respect the film innovates, in that, despite Hemsworth’s best efforts, it unfairly transforms James Hunt into a dreadful, crashing bore—which, given the sheer brilliance and charisma of the man himself, is quite a feat. Lauda’s ‘percentages’ approach to both sport and life is the richest material on offer and Bruhl’s scenes with his wife (Alexandra Maria Lara, brutally curtailed) hint at what a powerful character study the film could have been had it concentrated on Lauda only and had the swingers just to trust its audience to keep up with the rest.

Rush is that rare Hollywood movie to feature an ending stronger than the rest of the film (although that’s not saying much): a sequence between Hemsworth and Brühl segues with surprising fluidity into two short and unintrusive pieces of footage of Lauda and Hunt themselves, reminding us that there was a real story to tell here (and of Asif Kapadia’s Senna, which, using real footage, at least tried to do justice to the enormity of its subject). The last film foolish enough to cut its own throat in this way was Richard Attenborough’s Chaplin, wherein the climactic clips from the great man’s work consigned the entirety of the defamatory slurry that had preceded it to oblivion. Like Chaplin, Rush ultimately turns out to be a film that chooses as its subject brilliance, inventiveness, and fearlessness, while failing to exhibit a single one of those qualities itself. The sheer predictability of Howard's approach to the material—not one moment in Rush doesn't feel deflatingly familiar, not one sequence truly surprises us—delivers a comfort blanket for audiences and critics, when a story as strong as this should be lifting us out of our seats. Ron Howard doesn’t seem primarily interested in filmmaking at all: his work continues to amount to not much more than a high-speed postal delivery service. It’s on time, safely packaged, and the product corresponds to the description. Sign here, please? No, thanks.