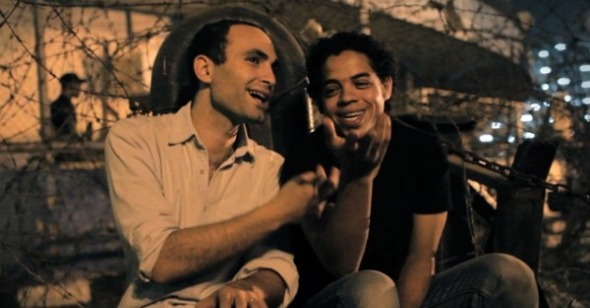 Fight the Powers that Be
By Eric Hynes

When casual Western observers think of the Egyptian revolution, they likely flash to the events of early 2011, when Egyptians gathered at Cairo‚Äôs Tahrir Square for weeks of sustained protests that resulted in the resignation of president Hosni Mubarak. But in The Square, Jehane Noujaim‚Äôs eyewitness documentary of the revolution, those events comprise just the first eleven minutes of running time. The fall of the seemingly insurmountable Mubarak regime was a watershed moment, but as the film illustrates, it hasn‚Äôt been the story of the revolution. That story may have been too complex, protracted, and bewildering to hold the attentions of outsiders, cable news networks, and even many Egyptians intent on restoring normalcy and stability, but not for Noujaim. Her resolve to remain in and around Tahrir for the past two and a half years has yielded an incomparable and invaluable document, as well as a superlative narrative of sustained struggle. Few films have better or more accurately articulated the nuances, the wild pendulous swinging, the potential and pitfalls of revolution.

When setting out to make a documentary about a place, group, or movement, it‚Äôs standard to find people who can be made into characters, who can then be used to represent, or at least stand in for, the whole. The characters that Noujaim selects for The Square prove to be more than symbolic, or bricks in the wall of the movement‚Äîthey are major players in it, brainstorming ways of expressing and popularizing their goals simultaneous to the film employing them to do the same. What this does for the film is elevate it beyond slice of life portraiture, making it rather a firsthand, ground-level account of action, of evolving thought and strategy, of how isolated moments can be fanned into fires, and from fires into outrage, consensus, and change.

Noujaim‚Äôs approach is polyphonic: the paths of three main players are intertwined with several other equally vital voices. The boyish, idealistic Ahmed serves as the heart of the film, rallying crowds, debating opponents, and offering, via voiceover, an ongoing rumination about the state of Egypt and on the revolution that functions as the film‚Äôs spine. Early on, Ahmed sees Tahrir evolving beyond a place to becoming an idea, albeit an idea that benefits greatly from having an anchoring location. With a wide, baby-faced smile and bounding, Tigger-like energy, he strolls around the square as if he owns the place, both embodying the sense of democratic ownership that he passionately espouses and evoking the infectious swagger of youth‚Äîall of it eminently relevant to the political moment.

By contrast, Magdy Ashour is an older gentleman whose anti-Mubarak convictions have been born of direct persecution. An outspoken member of the Muslim Brotherhood, he‚Äôs survived torture and imprisonment at the hands of the government, leading him to join hands with Christians and secularists at Tahrir in order to realize a freer future for his children. Though he and Ahmed come to view that future differently, their ongoing respect and affection for each other serves as a foundational stone for the film‚Äôs emotional narrative, as well as an ethical blueprint for the transforming society. Rounding out the trio is Khalid Abdalla, a Cambridge-educated actor (The Kite Runner, Green Zone) who returns to Cairo to offer a vital public voice of opposition‚Äîfurthering the life‚Äôs work of his own exiled father. Khalid proves astonishingly adept at interpreting the day-to-day machinations of revolution and retaliation for both international media outlets (he‚Äôs a frequent on-the-scene interview subject for CNN and the BBC) and Noujaim‚Äôs film.

With it‚Äôs Mubarak-toppling opening, The Square inverts the standard narrative (doc and revolutionary) of organized rebellion building toward a catharsis of success, of the heady promise of a new democratic society. We start with promise, only to encounter the afterparty realities: military double-talk, allies becoming enemies, emboldened citizenry growing impatient with instability, and idealism proving inadequate, if not detrimental, in the face of disparate needs and philosophies. Thanks to clarifying agents of time and distance, such dissembled developments are easier to track in, say, the French, Soviet or Cuban contexts, but Noujaim manages to make it graspable as it‚Äôs occurring, thanks in no small part to subjects who are uncommonly adept at perceiving the effects and repercussions of what‚Äôs happening around them.

"Our biggest mistake was leaving the square," Ahmed says after the military betrays the movement that had enabled Mubarak‚Äôs exit, and violently cracks down on the same protesters it had encouraged to go home with promises of protection and vows of shared goals. Later, after regaining the square and much public support in the wake of prolonged military rule, Ahmed and his comrades again lose the square, this time to the Muslim Brotherhood, which outflanks them by out striking agreements with the military and co-opting the movement‚Äôs rhetoric for its own aims. ‚ÄúTake the square,‚Äù Ahmed calls over his shoulder. ‚ÄúThe revolution is coming no matter what." But he and Khalid also acknowledge their own failings, seeing how the big umbrella of the revolution, which served them well in January of 2011, led to a diffusion of voices that hampered their delivering precise messages and realizing tangible goals‚Äîno match against a faction as well organized as the Brotherhood.

Meanwhile Magdy grows increasingly disaffected with that faction from the inside, seeing how his revolutionary brothers have been sidelined, sold out, and physically imperiled by the rise of the Brotherhood. This results in the democratic election of the group‚Äôs own Mohamed Morsi as president, culminates in a government less free than Mubarak‚Äôs and clampdowns at the square that are as bloody as any preceding. Magdy remains conflicted until the film‚Äôs end, torn between political and religious convictions, between idealism and pragmatism, and between the abstract promise of the nation and the immediate needs of his family. When Morsi falls to yet another military coup in the summer of 2013 (amazingly mere weeks before this latest cut of the film premiered at the Toronto Film Festival), the visibly fatigued (and older) Ahmed and Khalid are markedly less ebullient than they were for the winter of 2011 victory, while, as Ahmed acknowledges on a mutually mournful telephone call, Magdy is thrust back into being in a position dangerously afoul of the status quo.

Savvy Khalid crowd-sources video footage of activity in and around the square as evidence of military and police atrocities; in 2013, David can only conquer Goliath by winning hearts and minds and stoking moral outrage, and YouTube is his slingshot. But imagery captured for The Square offers more than evidence‚Äîit may carry the force of moral artillery, but it‚Äôs also art. Like ace photojournalists, DP Muhammad Hamdy and three additional credited cameramen venture right up against the barricades, or under the nose of testy policemen, or huddle in doorways while teargas creeps through the street, always framing in the most evocative possible way. In one terrifyingly thrilling sequence, the camera sticks by Ahmed as he inhales the air of frustration and righteous rage before palming a stone, charging through the streets to where crowds have thinned to only the most daring of protesters, and hurls his feeble missile into rows of shielded and helmeted officers before absorbing a ricocheted retaliation that draws a waterfall of blood from his head.

Reflecting the collectivism in front of the camera, eight people are credited with editing the film, which, because of the constantly evolving situation in Egypt, has been overhauled since its debut at January‚Äôs Sundance Film Festival. It‚Äôs a testament to Noujaim‚Äôs commitment to this story that the film remained open and subject to reformulation. Her sense of story isn‚Äôt to arrange recorded events into a familiar arc, or, as Khalid, to present them so as to support a tangible mission. She doesn‚Äôt just stick around when events complicate the story, waiting for another moment of closure‚Äîshe makes the story about those complications. Those who‚Äôd united to fight a common enemy discover that they‚Äôre one another‚Äôs enemy in the new reality‚Äîangling for power, shouting to be heard, confronted with the possibility of becoming what they‚Äôd despised. The film, like the movement it chronicles, doesn‚Äôt have a clear ending, no obvious winners or losers, no sense that there will ever be anything but complications.

Yet Noujaim makes clear that it‚Äôs a worthy struggle‚Äîand considering the betrayals and setbacks and tragedies on display, that amounts to a major achievement. It comes through in Ahmed‚Äôs wearied but undaunted face, in the persistence of the crowds at Tahrir, in the sight around Cairo of school kids playing ‚Äúprotestor‚Äù‚Äîthe culture of resistance becoming normalized and folklorized. Over two and a half years‚Äîand the film invites us to feel that expanse‚Äîwe‚Äôve watched a terrain torn up and turned over and flooded and starved, but also made more fertile for civic engagement, for the roots of a new society. There‚Äôs no guarantee that what it grows into will be what anyone‚Äôs fought for, or that Noujaim‚Äôs subjects won‚Äôt want different things in the future than what they want now (the ideologies of revolutionaries can be as volatile as revolutions themselves). At least now there‚Äôs a chance. ‚ÄúSomething fundamental inside of people has moved them,‚Äù Khalid says in the end. ‚ÄúI don't know how you kill that.‚Äù