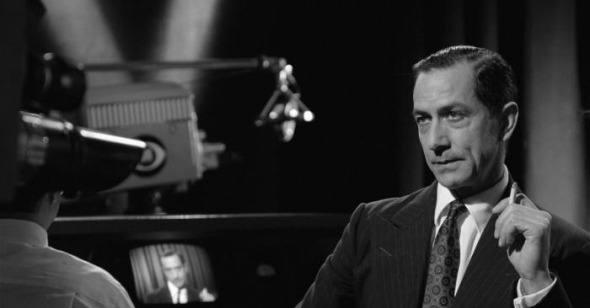 The Murrow Prophecies
by Eric Hynes

Good looking, smart, and responsible, George Clooney‚Äôs Good Night, and Good Luck performs its modest mission well. Creating a platform for CBS newsman Edward R. Murrow‚Äôs mostly forgotten mid-century soliloquies on the tenuousness of American liberties and the need for a tenaciously adversarial press, the film allies the Red Scares of the Fifties with today‚Äôs War on Terror without forcing a connection or constructing a metaphor. Clooney‚Äôs strategy is to let Murrow‚Äôs words stand alone. They are appropriate and prophetic, and through David Strathairn‚Äôs exhumation, eerily immediate. Everything in between is minor and diffuse, literally greyscale compared with Murrow‚Äôs high-contrast, black-and-white direct-address close-ups. Which benefits the editorials but makes the rest of the film feel slight, like the idle chatter of co-eds before and after a great professor takes the lectern. Maybe that‚Äôs why, at only 90 minutes, I found Good Night, and Good Luck both satisfying and a bit of a drag.

The film opens with Murrow‚Äôs 1958 speech at the Radio and Television News Directors Association convention in which he warns his colleagues of the slippery slope down which television news had already begun to slide, sacrificing journalistic rigor for ratings and profitability. To Murrow, a working democracy demanded a free and fearless press, one that acts on behalf of the public good rather than the bottom line. That TV news wasn‚Äôt meeting this demand in 1958, when American television was still in its infancy, wasn‚Äôt just ominous, it was‚Äîjudging from Strathairn‚Äôs polished but contemptuous deliver ‚Äîpractically treasonous. What had been a buoyant, picture-posing, back-slapping cigar-fest stops cold. Murrow struck a nerve. Good Night, and Good Luck asks for a similar response from its audience‚Äîto find this half-century-old speech relevant, just, and prophetic, and to recognize brilliance and decency in its speaker. For not only will the bulk of the ensuing film consist of this brilliant man illustrating through his own work the very tenacity that he calls for in his speech, it will also‚Äîand the film is very transparent about this‚Äîresume the speech at film‚Äôs end; not only setting the tone but framing the whole film within a newsman‚Äôs castigating address at an obscure event. Though granting the speech more gravity than it historically deserves‚Äîfor if its original audience had heeded its message our television news wouldn‚Äôt be as adrift as it is today‚Äîits prominence here gives Murrow‚Äôs words a second chance. Clooney‚Äôs re-enactment, unlike ordinary filmed representations of famous moments in history that aim to transport the viewer back in time, calls the speech forward, beyond the hermetic walls of an industry event, beyond the threshold of a new century, and asserts that its time is now. I‚Äôm reminded of Greil Marcus‚Äôs facility with similarly obscure moments in pop culture, moments he reclaims from ‚Äúthe dustbin of history,‚Äù empowering them anew. I can‚Äôt conjecture as to its impact, but Murrow‚Äôs speech will certainly have a wider audience this time around.

The same can‚Äôt be said for Murrow‚Äôs live news soliloquies around which the rest of the film is structured. Drawing large audiences during the time of three-network television, and only eight years after Murrow‚Äôs radio war correspondence made him a national folk hero, his ‚ÄúSee It Now‚Äù telecasts had a direct and positive effect on both public discourse and American politics, stalling Senator Joseph McCarthy‚Äôs fear-mongering machine and contributing mightily to its demise. Despite Murrow‚Äôs and ‚ÄúSee It Now‚Äù‚Äôs initial and historic impact, the assumption is that contemporary audiences won‚Äôt have much knowledge of the subject, and even those that do will find a reconsideration worthwhile in the here and now of 24-hour news media, infotainment, hyper-patriotism, and press cowardice. The 2005 context gives these events a new power, and Clooney steps back and lets his audience draw the obvious comparisons. Which makes it a real clean enterprise. As polemic, it may be unimpeachable. The problem, cinematically speaking, is that it‚Äôs too clean. Once the film‚Äôs structure becomes clear‚Äîbrainstorming and reportage, battles with studio heads, buildup and write-up, the big show with a big speech, back-slaps and applause, a jazz standard from Diane Reeves, repeat and then repeat‚ÄîGood Night, and Good Luck seems less like a feature film and more like a well-mounted exhibit at the Museum of Television and Radio.

I get the feeling that Clooney wouldn‚Äôt be offended by that observation. The press kit for Good Night, and Good Luck dedicates far more ink to journalists‚Äô biographies and historical context than it does to plot summary or star profiles. In the CBS studio, where the bulk of the film transpires, Robert Elswit‚Äôs camera follows actors up and down elevators and long halls, peering through glass dividers and fetishizing old monitors and phones like a geeked-out tour guide. Ensemble scenes are gorgeously shot to evoke cinema verit√©, but the meticulous outfittings and smoke clouds seem glass-enclosed. The film ventures outside the studio only briefly for celebratory drinks and jaunty transitions. Murrow‚Äôs personal life is never explored. Neither are the personal lives of notables like Fred Friendly (Clooney) or William Paley (Frank Langella). Only the home life of secondary characters Joe and Shirley Wershba (Robert Downey, Jr. and Patricia Clarkson) is glanced, and only to spotlight an outmoded CBS rule that forbade marriage between employees. The real show is the show itself. Clooney and co-writer Grant Heslov are clearly fascinated with the machinations of live television, and they lovingly detail the late nights and rolled-up shirtsleeved dedication that made those shows possible. With producer Friendly literally at Murrow‚Äôs feet, writing notes and cueing with taps to the knee, each telecast is a tightrope walk, a flub away from disaster. Taking on the Pentagon, McCarthy, and disapproving factions from within the network raises the stakes‚Äîand Murrow‚Äôs heroic profile‚Äîeven higher. Murrow‚Äôs live in-the-studio dialogue is delivered by Strathairn, but the rest of ‚ÄúSee It Now‚Äù is shown as it was. Rare is the fiction film that dedicates this much screen time to vintage television footage, whether it be of McCarthy berating Annie Lee Moss, navy pilot Milo Radulovich decrying his expulsion from the US Navy, or Liberace expounding on his search for Mr. Right.

Lacking a consistent visual style or personal approach to story or form, Clooney‚Äôs fledgling filmmaking career can be usefully examined only in light of his fascination with television. Before Good Night, and Good Luck, Clooney directed a live television remake of Fail-Safe (also black-and-white, and also revisiting the Red Scare), before making the feature, Confessions of a Dangerous Mind, about producer/game show host/purported C.I.A. agent Chuck Barris. He seems committed to bringing big-screen attention to small-screen subjects. His father‚Äôs career as an anchorman and TV news reporter was clearly formative, but his own early career in sitcoms and soaps is likely more crucial. After more than a decade of syndicated obscurity, best known for bit parts on shows like Golden Girls and Sisters and an ill-fated turn on the revamped Facts of Life, there was little reason to expect Clooney‚Äôs later success. By the time ER finally made him a household name and sex symbol, Clooney was well into his thirties. With his films, Clooney simultaneously gives television its due and, despite his having graduated to a more elevated format, refuses to leave it behind. Perhaps out of consideration of his once stalled career, Clooney seems intent on reclaiming forgotten figures and drawing attention to behind-the-scenes labor and untelevised drama (interestingly, Good Night, and Good Luck‚Äôs co-writer, Grant Heslov, is a veteran character actor whose television career mirrors Clooney‚Äôs‚Äîminus ER). Though cursory, one of Good Night, and Good Luck‚Äôs few non-Murrow subplots tracks the demise of Don Hollenbeck (Ray Wise), a local anchorman who killed himself over McCarthy‚Äôs ceaseless red-baiting. Contrasted with the reasonably well-known story of Murrow‚Äôs showdown with McCarthy, Hollenbeck‚Äôs story is more fascinating, and heartbreaking, in its obscurity. Clooney might not be prepared to dedicate an entire film to a dustbin figure like Hollenbeck, but his respect for his subject ‚Äîgreat and small‚Äîis what makes his filmmaking worth following, if not yet worthy of much more.