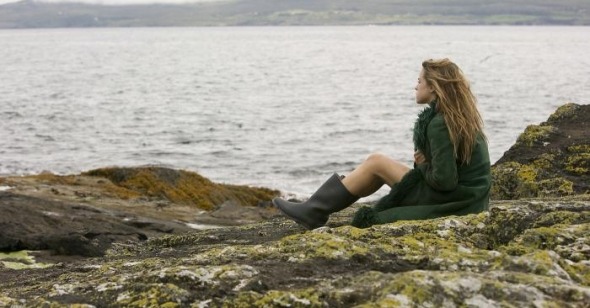 From the Depths
By Chris Wisniewski

“I kind of wish that something strange or wonderful would happen,” eleven year-old Annie (newcomer Alison Barry) sighs to her fisherman father Syracuse (Colin Farrell) as she prepares for dialysis treatment towards the beginning of Neil Jordan’s Ondine. Like many of Jordan's protagonists, Annie and Syracuse are outsiders. Precocious, largely wheelchair-bound Annie suffers from kidney failure and endures callous taunts from her unsympathetic classmates; Syracuse, a recovering alcoholic, remains an object of ridicule in the Irish town where he's commonly known as Circus, a nickname he earned years earlier for his drunken behavior. Both the film and its kindhearted central characters are firmly rooted in a sense of place: set and shot in Jordan's home of Castletownbere, the film subtly evokes the diffuse mechanisms of social judgment and exclusion that can too often typify small, hermetic communities. For Annie and Syracuse, neither escape nor belonging is really possible. They aren’t completely impotent—after all, Syracuse sobered up and left Annie's mother through sheer force of will when he discovered his daughter's illness—but their social circumstances are not entirely of their own making.

But deliverance has perhaps already arrived in the form of the titular Ondine (Alicja Bachleda), a mysterious woman Syracuse pulls from his net while fishing in the film’s opening scene. Syracuse performs CPR and miraculously revives her. Skittish and model-beautiful, she seems to instinctively trust the fisherman but insists on keeping her presence concealed from the outside world. After little deliberation, he decides to take her in. In short order, Ondine, much like Snow White (as one character knowingly observes), whips Syracuse’s dilapidated hovel into shape and also begins to accompany him on a series of improbably successful fishing excursions. Against reason, he suspects that the strange, lovely song she sings to the sea in an obscure foreign tongue has some supernatural power over the fish (“You want us to believe in fairy tales?” two patrollers ask, suspecting illegal fishing practices after Syracuse takes in a boatload of salmon). For her part, Annie, who lives with her alcoholic mother and her mother’s boyfriend, discovers her father’s new houseguest and convinces herself and Syracuse that she may be a Selkie, a kind of Irish mermaid. (Annie even tests Ondine, at one point driving herself off a pier so the suspected Selkie will dive into the water to save her.) Ondine—and Jordan—neither confirm nor deny Annie's belief.

Remarkably, Jordan continues to get a fair amount of mileage out of the is-she-or-isn’t-she-a-mermaid suspense up until the film’s rushed third act. Even so, the ambiguity of Ondine’s nature is less important to Jordan than the hope she brings his wayward characters. Here, as in The Butcher Boy and Breakfast on Pluto, reality and fantasy seem to commingle, and the fantastic offers respite from the uninviting and unforgiving social environment in which the movie is set. Unlike those earlier films, though, Ondine is grounded in naturalism. Annie believes in and even tests Ondine, at one point driving herself off a pier so the suspected Selkie will dive into the water to save her. Despite Annie’s persuasive insistence and the frequent references to fairy tales throughout (the screenplay is littered with the phrase “once upon a time,” and as Annie investigates Ondine, she continually channels Alice in Wonderland by greeting each new discovery with “curiouser and curiouser”), the film has a dramatic straightforwardness that distinguishes it from the director’s more obvious forays into fantasy. Mermaid story or no, the movie forgoes the flourish of Pluto’s subtitled birds and Butcher Boy’s talking Virgin, opting instead for quiet, delicate restraint.

Low-key without being slight, Ondine heralds a welcome, if not monumental, return to form for Jordan after the misbegotten Jodie Foster vehicle The Brave One. It also marks the first time he has worked with longtime Wong Kar-wai cinematographer Christopher Doyle, and predictably, the result of their collaboration is quite lovely. Doyle and Jordan linger on landscapes and beaches, streams and seas. Lush greens contrast nicely with the gray clouds and muddy waters that dominate the film’s palette, and the movie’s first half features a few striking underwater shots, including a low-angle image of Syracuse and Ondine talking to each other with the camera positioned just below the water's surface, looking up at them. The movie has a casual visual elegance that it mostly sustains up until its hyperstylized final half hour, when it takes an unwelcome turn into generic thriller territory.

When Ondine and Syracuse consummate their relationship, a menacing mystery man arrives in search of her, and the movie begins to slump towards its conclusion via a series of improbable plot-twists through which it hastily ties up its many loose ends (something silly about buried drugs and a Sigur Rós song). The action-packed climax dilutes the appealing family drama at the film's center; Ondine is better before the guns come out and the booze starts flowing, when Annie and Syracuse fall for Ondine together, and she falls for them. She teaches Annie how to swim; they take Ondine to shop for clothes (though Annie wittily quips that the town is “sartorially challenged”). Syracuse allows this stranger into his life, but he accepts the luck she brings with her more reluctantly. Farrell has, perhaps, never been more likable in a role—warm, caring, and earnest, especially in his tender scenes with Barry. Farrell’s played the romantic lead before, but here, the relationship between father and daughter resonates even more powerfully than his erotic attachment to Ondine.

Setting aside its fairytale and thriller elements, Ondine is really just a story about a sick child and her damaged, good-natured father. Jordan has surely made more politically and psychologically astute movies, but rarely has he offered the pure emotional clarity Ondine displays in its finest moments. It will undoubtedly be criticized for being, at turns, obvious and contrived, but even the most callous or cynical viewer can't deny its endearing and refreshing earnestness. Ondine flirts with the miraculous only to settle on believably simple and affecting sentiment.