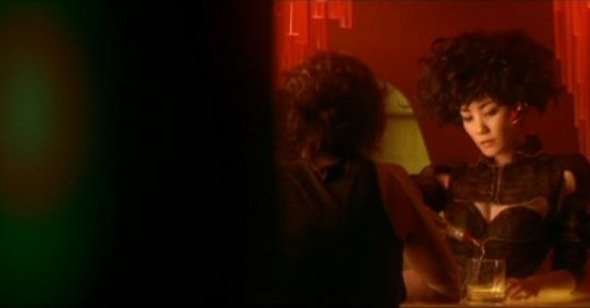 Whether explicitly or subtextually, all movies are about memory. Due to the alchemy of emulsion, film footage is memory made material, and, when projected, animate. Film obsesses over what it’s chemically and physically well-suited for—recording, recalling, representing, replaying, replacing, witnessing, mimicking—an overdetermined metaphysical preoccupation with what remains of what has past. If modern art developed its subjective, abstract, psychologically complex character in response, at least in part, to the more objective and mechanical arts—photography and film—I think it’s fair to say that film, in response to digital’s emergence, has entered its high modernist era, an era when movies are even more obsessed with their own materiality, their own mortality. Ever effective at remembrances of things past, it seems that film is finally ready to consider the actual, human value of the enterprise. Or maybe I’m being too abstract myself, projecting onto the cinema at large the seismic vibrations I felt after seeing Wong Kar-wai’s 2046 in the wake of last year’s Before Sunset and Eternal Sunshine of the Spotless Mind, which came in the wake of Jean-Luc Godard’s In Praise of Love and many others. Wong’s film has the integrity to eat its own beautiful self, to turn obsessive reflection from project to subject, reconsidering everything from Wong’s own characters and films to the morality of memory itself.

Sequels rely on moviegoer memory for their success, promising to build on what came before or, at the very least, reminding you—in promotion and in the theater—of what you saw and presumably liked the first time. 2046, like Before Sunset, is a sequel, no matter what the filmmakers, publicists, or critics say. Lazy corporate comic book franchises may have debased the term, but both films resume a narrative begun earlier and benefit from a viewer’s familiarity with the prior film. Yet both Before Sunset and 2046 do much more than congratulate viewers for this familiarity; they choose to challenge and even subvert expectations established by their forebears (Before Sunset and In the Mood for Love), and since 2046 follows an unqualified masterpiece, it anticipates and knowingly dissatisfies eager and skeptical viewer alike. For those seeking more of the same, Wong’s new film hasn’t the single-minded minimalism, the unrequited romance, the thick nostalgia by selective immersion, the pathos. For skeptics, 2046 looks and sounds and feels too much like In the Mood for Love but without the magic, and isn’t Wong’s obsession with 1960s Hong Kong getting a bit old? Truthfully, I had both of these responses during and after my first viewing, feeling it suffered from the brilliance of its predecessor while simultaneously corrupting my memory of In the Mood for Love. On second look I see that’s quite the point. 2046 makes waves of its own placid waters, and the disturbance extends from protagonist to second, third, fourth parties and viewers, extending forward and back and overlapping implication with empathy, action with reaction, present with memory.

Even as he builds his ever more elaborate monument to 1960s Hong Kong, Wong rips the soul from the endeavor, his camera fetishizing and memorizing the objects and interiors of the era while his characters dramatically invalidate such reflection. His nostalgia is no less intense here than it was in In the Mood for Love, but he’s copping to how it fails the present, particularly through his ever-wistful protagonist, Mr. Chow (Tony Leung). 2046 picks up several years after In the Mood for Love, and Mr. Chow (and Mr. Leung) looks pretty much the same except for a dapper mustache on his upper lip. The mustache never quite suits him, but it’s indicative of Mr. Chow’s transformation from restrained, respectful romantic to self-consciously selfish cad. Knowing what we know from the earlier film, and from his occasionally confessional voiceovers, his carefree behavior isn’t very convincing, but for the women he seduces and scolds, beds and leaves, it’s all they know. As a result, though Mr. Chow is the bridge from the previous film, our main focus and the voice we hear throughout, we have greater sympathy for these women. Still smarting from the tragedy of his failed romance with the spectral Su Li (Maggie Cheung), Chow repeatedly turns away love, and his bittersweet fidelity to the past comes off in the present as just plain sour.

There are four women that Chow entertains in 2046; they enter and re-enter the narrative at odd intervals, and their individual stories linger in the mind with each pass. Despite his teflon pose, Chow softens toward them as well—though it’s not love he feels, it’s empathy: they’ve got broken hearts too. Most of the action (sexual and otherwise) takes place in the same hotel at which Chow rendezvoused with Su Li in In the Mood for Love, and his rental of room 2047, next to Su Li’s old 2046, is strictly nostalgic. His rut is literalized—he’s retreating into his past. His interest in women coincides with their moving into room 2046. To walk down memory lane, to see rhymes in an arched back or eyebrow, or to wake up pent-up ghosts with a banging bedpost, he need only walk one door down.

His longest affair is with Bai Ling (Zhang Ziyi), a much younger woman who plays by Chow’s coy rules but falls for him completely. Their affair is hard to watch because Chow sees the emotional inequalities but indulges anyway. His remove is our own, and Bai, though clearly humiliated, towers over the proceedings for having the heart and vulnerability to actually care. A playful but loaded ritual of leaving cash “payment” in one another’s apartment after each night together soon represents the corruption of their relationship, with Bai keeping the mound of bills in a tin beneath her bed. After the affair has ended, Bai attempts to return the money to Chow to help repay a loan. But even this Chow can’t abide. To accept would mean acknowledging that an actual relationship transpired and ended, and his mind is floating far above such messy matters. His refusal leaves Bai feeling more than heartbroken; she feels bought.

Chow is more respectful, and enamored, of the hotelier’s daughter, Wang Jing Wen (the triumphant—or is it nostalgic?—return of saucer-eyed Faye Wong), who pines for a Japanese boyfriend (Ping Lam Siu) that her father refuses to accept. Sharing her desire to be elsewhere, and safe from her affections, he describes his platonic summer with her as “the greatest of my life.” Their shared love of genre fiction develops into a writing collaboration and culminates in Chow’s story, called “2046,” which creates characters of Wang and her boyfriend and sets their longing in a futuristic train of remembrance that takes passengers back, back, back, to 2046. When Wang’s father finally relents and allows her to marry, our Chow, alone again, sends her the finished story. Her response: Couldn’t there be a happier ending? Chow’s failed attempts to change the ending—his pen hovers over the unwritten page for hours and days—proves what he’d already suspected. The story isn’t hers, it’s his own. And his story can have no other end than the one he’d already penned. He’s gone to 2046 and won’t return.

The dramatization of Wong’s story manages to strand us in the past even as it suggests a path forward. In the future, we’re still haunted and immobilized by memory. The sci-fi scenic design is appropriately familiar, a fantasy pitched forward by dated 1960s futurism, and the shots are classic, color-saturated, slo-mo strobe Christopher Doyle—in other words, nineties Wong via 21st-century Wong’s ode to the 21st century as seen by the sixties. New and old spaces, new and old faces, same stagnant air. No longer the darling of Hong Kong’s supposed new wave, and evidently—after 2046’s trophy-less appearance at Cannes in 2004—no longer worthy of Quentin Tarantino’s acclaim, appropriation, and exoticism, Wong now seems out of place in broad discussions of new Asian film. His art, if not his distribution, is better for this fact, since his films have always had universalizing ambitions that national and racial generalizations tend to overlook. Though he meticulously situates his films, he’s more concerned with the raw emotions that fill and spill all over the place. Most of Wong’s films recount events passed, with melancholic voiceovers sharing time with recurrent pop songs of private import, visual sequences like thumb-smudged snapshots one can’t bear to throw away. 2046 is both the pinnacle of this preoccupation and its discomforting undoing. It dwells not on the bleeding heart but on the bloodless heart avenged. Chow’s sublime catharsis at the end of In the Mood for Love, his secret safely uttered but unheard, is counteracted in 2046 by his all-too-human transference of sorrow. His mind in the past, he hurts another lover’s present, the trauma of which that lover will carry forth and remember to the point of obscuring and hurting yet another lover, and on and on.

Few films have ever been this down on memory. Its virtue has never really been up for debate. Memories can’t always be trusted, and some are painful and a bit hard to take, but having them is generally a good thing, whereas not having them is the foundation of terror. Amnesia films speak to one of our deepest fears, a fear that the recorded arts are keen on sustaining: loss of memory is tantamount to losing one’s self. Wong Kar-wai’s 2046 doesn’t exactly contradict that belief, but it does question the worth—and investigates the consequences—of a life entirely defined by memory. Surely there’s more to us than clips spliced together, looped and projected against one another, like an auteur’s polished replay of styles and themes and loves that came before. Every now and then, for the sake of moving forward, a bit of amnesia might be exactly what we need.