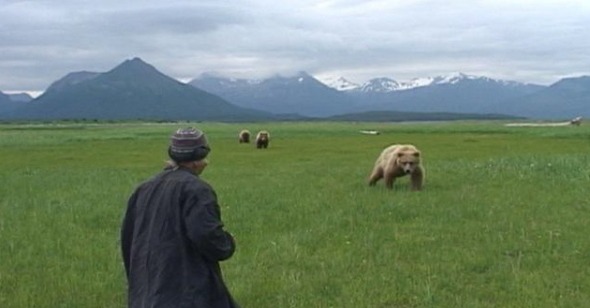 The Beast Within
Vicente Rodriguez-Ortega on Grizzly Man

‚ÄúI believe the common denominator of the universe is not harmony but chaos, hostility and murder‚Äù ‚ÄîWerner Herzog

Grizzly Man is a battle between two antagonistic voices‚ÄîHerzog and Treadwell‚Äîwith one common denominator: an uncontrollable craving for existential excess. The story of the wannabe actor turned into a wild grizzly bear lover that took a dramatic turn when he was eaten along with his girlfriend Amy Huguenard by the very animals he declared to love is simply Herzog‚Äôs conduit to tap on the most common leit-motif in his film career: the exploration of the irrational nature of the human condition and its crooked meanders.

For, in Treadwell, Herzog undoubtedly bumped into an all-American version of his most remarkable diegetic alter ego‚ÄîKlaus Kinski. Physical similarities between the two actors apart, Herzog‚Äôs epics featuring Kinski, Aguirre: The Wrath of God and Fitzcarraldo, are above everything else a full-frontal encounter between a vast and carnivorous landscape and self-confident historical or fictional egomaniacs in which the miniscule power of human beings to overcome the utter indifference of nature renders death as indeclinable. In Grizzly Man, Treadwell‚Äôs exacerbated in-camera performativity accomplishes the same function. As his poster-boy edited image gets re-composed little by little with Herzog‚Äôs multiple takes on Treadwell‚Äôs speeches, Treadwell increasingly appears before our eyes not as an animal lover but as a self-alienated human being whose loath for any form of organized societal interaction plunged him into the belief of a heartfelt kinship with the animals he painstakingly recorded summer after summer in the confines of Alaska.

Most remarkably, Herzog lets Treadwell speak as much as he censors him. As Treadwell goes off on a tirade of ‚Äúfuck‚Äùs against the national park service, all of a sudden his voice is muted and Herzog offers his contrapuntal narrative of the whereabouts of his object of study‚Äôs psychological condition. Likewise, we see censorial God Werner Herzog listening to the audio recording of Treadwell and Huguenard‚Äôs demise only to soon thereafter tell the owner of the tape‚ÄîTreadwell‚Äôs ex-lover‚Äîshe should never listen to it and destroy it. The German director‚Äôs very onscreen act of consuming those agonizing moments in Treadwell and Huguenard‚Äôs lives positions him in the same God-like position Treadwell himself felt in relation to the natural and ultra dangerous world of the grizzly bears. For Herzog ends up giving up the standard talking head structure the film temporarily adopts in a dogmatic documentary fashion for the sake of establishing a one-to-one combat with the self-recorded Treadwell. The testimonies of all the anti- and pro-Treadwell personae Herzog taps into ultimately fall prey of the filmmaker‚Äôs love/hatred for his privileged guinea pig: a behind-the-scenes Treadwell juxtaposed with Herzog‚Äôs powerful aural presence.

‚ÄúWhat haunts me is that in all the faces of all the bears that Treadwell ever filmed, I discover no kinship, no understanding, no mercy, I see only the overwhelming indifference of nature. To me there‚Äôs not such a thing as the secret world of the bears. And this blank stare speaks only of a half-bored interest in food,‚Äù Herzog calmly states as we see Treadwell‚Äôs recording of his bear-assassin in a close-up. Soon though, the overwhelming beauty of the Alaskan reserve assaults our senses. In the end, Herzog does indeed give absolute power to the very nature Treadwell confined to the back of the frame in his numerous self-centered testimonies. Grizzly Man is not ultimately about how Treadwell succeeded and eventually failed to survive in the midst of a callous nature but, conversely, about the genetic ruthlessness that reigns supreme in the natural world. This is why, in the last shot of the film, Herzog features Treadwell walking in group with two more bears, away from the camera, to the left of an ever-flowing river, as though they were closing their summer season together and heading to hibernation until the following summer. Grizzly Man, despite Herzog‚Äôs ultimately authoritarian voice, gains its universal appeal not by simply exploiting and exposing the nuances of Treadwell‚Äôs troubled psyche. Paradoxically, the film describes the opposite trajectory: it normalizes Treadwell‚Äôs otherness by reminding us constantly that each of us is simply a step away from a retreat into a periodical grizzly bear territory. Because, whether we like or not, most of us will end up being runners-up for the Ted Danson role in Cheers . . . or something equivalent.