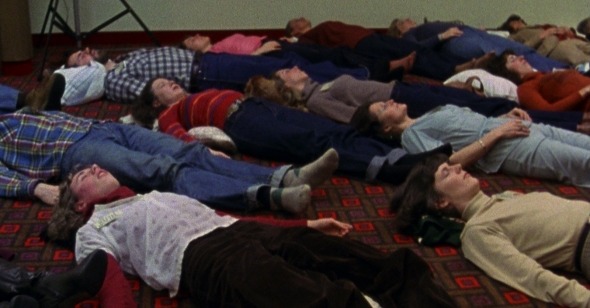 Demonic screens at Museum of the Moving Image April 8 at 7:30 p.m. as part of the series Irregular Evidence: Deepfakes and Suspect Footage on Film.

There’s a strong sense of disquiet in the work of Pia Borg. Operating at a crossroads of the ineffable, the surreal, and the oppressiveness of media and modernity, her films are as formally layered as they are thematically rich—nonfictional, historically based works that nevertheless play elusively, spectrally. With her latest film, the hearty short Demonic, which premiered at the 2019 Cannes Critics’ Week and later played at the 2019 New York Film Festival, the filmmaker revisits the global “satanic panic” phenomena of the 1980s via transcripts of psychological analyses, archival mass media footage, overtly uncanny CGI, and performance. Demonic disorients the viewer from beginning to end, both experientially and intellectually. Thirty minutes later you’re left unsure of where you’ve ended up, and of where you’ve been, and likely unable to stop wondering and inquiring. The following is an edited conversation I had with Pia in Cannes.

Reverse Shot: How did you conceive of Demonic?

Pia Borg: The original trigger came when I was researching for another project, and that always happens to me, that I get sidelined while I’m researching and distracted with something else. I was doing research into the history of Cinerama, because I was making an installation. And in an essay I was reading there was a footnote about the publication of a book that many understand to be the origins of the satanic ritual abuse panic. It hit me, and I started researching that immediately, and the film really flashed before my eyes. During the ’80s, I was in Washington, D.C. for five years, so it also triggered something recalled from that period of my childhood. And obviously the satanic ritual abuse traveled globally and it ended up in Australia (where I’m from). So when I went back there it also triggered a recollection of my own experience growing up there as well.

RS: It’s like a cultural virus that spread around the world.

PB: Exactly. So that was the initial trigger, but as you say there are so many layers because it’s a research-based project. The more you research the more you realize the connections between the subject and the actual greater culture of the ’80s at the time. I think that’s something I’m always interested in because I always end up sort of working with historic subjects, but it's what they can kind of reveal about the greater culture of that era and what it says about our present day as well. One of the things I was really adamant about with this film was that even though it’s a historical subject, we would experience it in the present tense, so I didn’t want to have any modern day testimony that had a stamp of approval, like “this is the truth and reality of the situation.” I really wanted us to experience the way that history and our representation of truth is mediated through images, through popular culture, through the news, through horror films, and through archives of therapy sessions. I really wanted to blend these different representations of truth and for us to experience it in the present tense.

RS: So when you say experience in the present tense, what were those decisions to get us there? You’re talking about the fact that we’re aware of looking at archival footage, and you also do some CGI in terms of recreating spaces for recordings, and you also have reenactments. Do these all have to do with leaning into the present tense?

PB: It’s true that those reconstructions are in a sense, they are a kind of reimagining—a contemporary reimagining of the past. But, I guess when I say present tense I’m referring to the structure—the film is bookended by two specific incidents that were cornerstones of the satanic ritual abuse panic. The first was the release of the publication, which is the first recorded testimony of a woman’s recounting of having experienced satanic ritual abuse and the doctor who was one of authors of the book and coined the phrase “satanic ritual abuse.” And it was that kind of research and testimony that led to several other cases, the most renowned being the McMartin crucible trial, which was one of the longest and most expensive trials of U.S. history. So the reconstructions are playing with the notion of false memory, and the CGI is this kind of hyperreal setting. And CGI is kind of archival in its own right; with CGI, you're buying a lot of readymades, so it’s kind of a digital archive about memory.

RS: The way you shoot and represent these moments, certainly contributes to the horror film tone. There's a sort of slow movement and panning through space, and it looks hyperreal as you say.

PB: I wanted to blend the genres of horror and documentary because they sit at two complete, opposite ends of the spectrum. Throughout my work I have been interested in the uncanny and I think this subject lends itself towards that. The vivid recollections that these women and children were experiencing were reminiscent of films like Rosemary’s Baby or The Exorcist. That notion of this abject kind of horror infiltrating into this domestic and familiar space is something that I really wanted to style or visualize in the film,

RS: What are your feelings about potentially misleading the audience or putting us in the present tense? There are things revealed over time in terms of authenticity

PB: Looking back, we know that the true devil of this story was not Satan, but the media, law enforcement officials, and mental health professionals. So I wanted the audience to experience the power of manipulation of images and the media, and experience it in the present tense. For the audience to experience it in the present tense is a powerful way for them to look back at the role that the media played in this hysteria, and it’s interesting to think what it says about that specific era because this was the introduction to the 24-hour news cycle. So there was a need to kind of build a lot of power and persuasion and attention and hysteria to literally fill air time.

RS: This is the second film, if I’m not mistaken, in which you call into question psychotherapy or psychology in terms of practices. Are you particularly interested in that, or is this part of some larger questioning of these forces in terms of understanding ourselves?

PB: Absolutely. We talked earlier about the notion of the uncanny, and I’m interested in that history and the relation to Freud and this idea of recovering memories, and the relationship of this to the cinema is something that's interested me in my filmmaking career. But I’m interested in that history relative to feminist history as well. I think this is often related to how the hysteria of women was imagined and understood by a community that was controlling and medicating and possessing them.

RS: Can you talk a little bit about your plans for Demonic? This is a short, but you’ve said you’re thinking it's part of a feature that you're building towards.

PB: Originally I wanted to dive straight into the feature project, because for me it's such an expansive time, and there’s so many elements and layers. For the purpose of developing the short I focused on these two particular cornerstones, but I’m interested in so many different aspects of it, like the culture of the ’80s. The fear of new technologies was one of the threads that was fueling this kind of panic, and the introduction of the VHS into the domestic space and the 24-hour news cycle. I’m interested in expanding on the analysis of understanding how the changes in women’s roles during the ’80s affected and fueled the hysteria, and also the relationship towards the evangelical movement and alternative religions during the late ’60s and the ’70s. So I think there’s certainly a lot there to draw on in a longer piece.