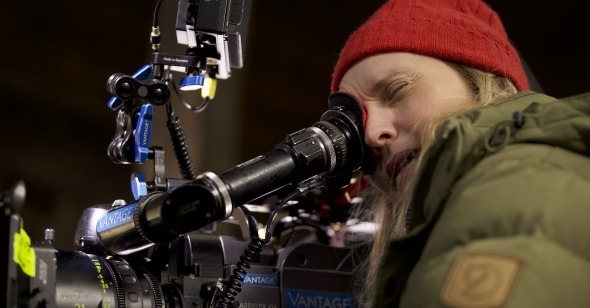 The Rhythm of Life:
An Interview with Mona Fastvold, director of The World to Come
By Caitlin Quinlan

The World to Come opens in a frostbitten land. A wintry hillside of anemic greenery and bare trees; snow balancing on branches and thicketed over the roof of a modest yet comfortable mid-19th century house set in a clearing. “Ice in our bedroom this morning for the first time all winter,” notes Abigail, as she bakes potatoes and warms the home.

Mona Fastvold’s second feature as director, following The Sleepwalker in 2014, is a tender and lyrical portrait of two American frontierswomen and the boredom, longing, and desire that imbues their everyday lives. Tallie (Vanessa Kirby) arrives with her husband, Finney (Christopher Abbott, harsh and polished), in a new county, where they occupy a neighboring farm to Abigail (Katherine Waterston) and Dyer (Casey Affleck). This rural environment has a grand and untamed quality, with distant mountains surrounding a grassy valley where remote plots of land are tended by inhabitants who meet rarely, except for Sundays at the local church. Tallie rides past Abigail’s home in a horse and carriage on the morning of her relocation and the women exchange stolen glances, the murmurings of affinity and companionship beginning to blush each other’s cheeks. Abigail’s life with the downbeat and bristly Dyer has been tarnished by grief and absence, and Tallie’s presence introduces once again the possibility of light.

Abigail’s timidity soon fades to curious excitement in the company of her new friend. Their relationship builds to a swell of intimate love neither has experienced before, narrated softly by Abigail throughout the film. Its source material, a contemplative and poetic short story written by Jim Shepard who adapted the screenplay with Ron Hansen, comprises Abigail’s Sunday diaries, weekly installments of Tallie’s intoxicating existence blended with the regularities and placidities of rural life.

Fastvold has an eye for delicate details; a shirt cuff intricate with lace, the sharp blue of Vanessa Kirby’s eyes against her curling flames of hair, the squeak and spin of a device used to peel apples. Yet within these focused moments, The World to Come is a film about finding looseness in structure, in teasing out sensuality from the rigidity of tradition and routine. The markings of dates and time passing; the logging of business in Dyer’s ledger; the documenting of Tallie’s every activity in Finney’s journal—these records mark the lines within which these women are supposed to live their lives. Instead, they sneak an hour together here, a minute there, rationing time that is solely theirs. We wonder what happens between the days marked out, what secret moments of affection and passion they share, and what fantasies and memories fill in their gaps.

Reverse Shot: Both The World to Come and The Sleepwalker seem interested in paired dynamics between men and women, and how people can bend to the will and emotion of others. Is this something that particularly interests you as a filmmaker?

Mona Fastvold: It does, yes. I think I grew up watching a lot of dramas—you know, being Scandinavian and all, you kind of have this steady diet of Bergman and Tarkovsky, and so seeing the world through this microcosm of two couples and breaking up those archetypes has always been interesting to me.

RS: Was this something that stood out to you when you were approached with the script for The World to Come?

MF: When the script came to me it felt immediately like something I could have written. I like a really good character study, and this felt like that with cinematic potential, when you see something where you can be in these really intimate settings and examine a relationship, but at the same time break it open and find great, exciting cinematic sequences as well.

RS: The film explores that cinematic potential through the grandeur of nature and the Romanian landscape where you shot the film.

MF: I really identify with how nature can feel meditative and there can be comfort in it, and that it can also be terrifying and overwhelming. Playing with that imagery, with these characters and that backdrop, is one of the reasons also why we were excited to shoot in Romania. I could turn the camera in any direction and not shoot anything modern—no matter where I went to in that area in Transylvania, everything was just almost of the [film’s] period.

RS: The World to Come seems to me to be at once about structure and rebellion. Everyday life is on display, but also there’s this overwhelming love story. How did you think about striking this balance when you started out with the project?

MF: What I was looking to do was to try and create a kind of hypnotic rhythm for the first part of the film that I could amp up as the film moves along. So there's a lot of repetition in the beginning with the diary entries and the dates, and there are also certain sentences repeated throughout, these mantras, so in that way I felt like I could play with time. All this time had passed where nothing happened, where Abigail just did the same and the same and the same, and all of a sudden we are led into something extraordinary. Playing with time is wonderful because you can think about some of these things being memories, and then some of these things happening in real time, and some of them as dreams or fantasies.

RS: How did you work with Daniel Blumberg to build the score for the film? It also seems to toy with that dichotomy of everyday life and the extraordinary.

MF: I brought Daniel in really early on, upon getting the screenplay. We started thinking how we could create a score that plays in tandem with a voiceover, and so that neither the voiceover nor the music felt slapped on top to help drive the narrative but instead truly became woven into the material of the film. Daniel improvises a lot of his music, and that was his method of creating the score too. He worked with scratch recordings of the voiceover that Katherine would do before shooting, and worked with me while we were shooting a bit to bring some of the natural sounds of the film into his score as well. There was an orchestra of cowbells that would come down over the mountains in the evenings and sometimes played into our scenes, so we ended up doing a whole track of cowbells throughout the whole film that kind of comes and goes. So we just wanted it to be at times extremely organic, and then at other times jarring, to pull you out or pull you in.

RS: How do you feel you were able to make this story your own as a director, alongside the two screenwriters?

MF: I wouldn’t have done the film unless everyone was really collaborative. I had to move into this story and make it my own; I wouldn’t know how to make it any other way than to take ownership of it. Ron Hansen and Jim Shepard were very collaborative and excited for me to come in and say, “I want to explore this theme more.” I thought it was really exciting with Ron and Jim that they're both historical writers and they have so much knowledge of the period, and I thought it was really fun to just dip into their archives of books and images. They also have a different perspective on love and friendship and marriage, because they’re of a different generation from me, and I thought the combination of them and me made a fun odd couple.

RS: I wonder about your thoughts on a question I think filmmakers are being asked to consider more and more, that of who they choose to work with in light of past allegations against them. Casey Affleck is a producer and stars in the film.

MF: Yeah, it's hard for me to say what anyone should or shouldn't do in a situation like that because I think it’s just completely case by case. But Casey had stated, both privately and publicly, that he really wanted to listen and to learn from female filmmakers in the industry and I thought that was interesting.

RS: In terms of working with your actors, were there specific, personal details for both Abigail and Tallie that you wanted to make sure were explicit in the film?

MF: Katherine’s performances are always really subtle and beautiful, and I thought that was important for Abigail because you want to lean in and you want to be curious about her. I wanted somebody that felt like they held the secret, and I think Katherine has that in every performance in some way or another, and she also has a lot of authority and strength and I thought that was important for Abigail. I liked that she was taller than Casey too. The same with Vanessa, she again has authority and this deep, beautiful voice. She's got a really great sense of humor and comedic timing as well, which I thought was great for Tallie. They're very different tempo, Vanessa and Katherine, just naturally. Vanessa goes fast and Katherine goes slow and then they kind of feed off each other and find a really good rhythm, and that was what we were looking for throughout all those scenes, to see how we could find the right dance, the right choreography for everything that's left unsaid. 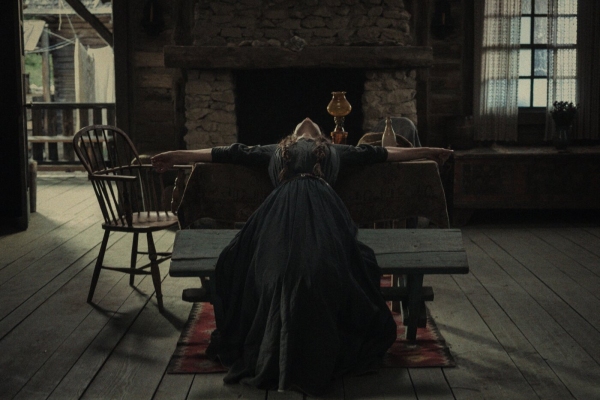