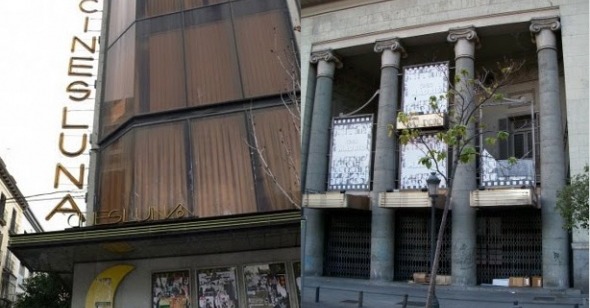 Out of the Past
By Vicente Rodriguez-Ortega

My first memories of going to the movies as a young kid are of seeing Ken Hughes’s 1968 Chitty Chitty Bang Bang and Mike Hodges’s 1980 Flash Gordon. Somehow, even though they were released twelve years apart, they both opened in Spain in the early eighties. I saw the first one with my mother in Valencia at the Rex theater, an old modernist building that became a shopping complex in the last decade. The second screening was at the ABC . . . Park, one of the only two multiplexes that existed in Valencia in that era. In Valencia’s downtown, those were the days of theaters with foreign-sounding names—Rex, Tyris, Lys, Capitol—and second-run theaters where I sought refuge from the bright summer sun to view three movies in a row. Back then, kids like me went to the movies and played in the streets; we were only at home by dinnertime. At night, we would get our movie educations on state-owned TV, which would show retrospectives on directors like Anthony Mann and Billy Wilder, or actors like Paul Newman, Errol Flynn and John Wayne. These helped shape the collective film imaginations of the Spaniards. Private TV stations came into existence in the early 1990s; they came hand in hand with malls. Single-screen theaters started to disappear and kids deserted the streets, turning to video games and watching videos at home.

The reader may have noticed that all my movie references have the same origin: Hollywood. For any kid growing up in the early 1980s, American cinema was, as it is now, the reference point. My mother used to say that she would never see Italian or French movies because they were “boring” and “too complicated.” She preferred Rambo and Schwarzenegger, and still does. Spanish movies were out of the question. No one went to see them back then. My only cultural pointer was Hollywood. By the time I reached university, I dared to go to a crammed art movie house that felt on the verge of immediate collapse. For the first time, I was exposed to that other cinema I still watch and love.

All this has faded away. Most of the small venues that show foreign films are barely surviving; many of them are long gone. In fact, all the above-mentioned theaters (except the Lys, now transformed into a multiscreen complex) and many others no longer exist. The days of single-screen movie houses with two balconies, such as the Serrano theater, are forever gone. Multiplexes rule almighty.

The biggest multiplex theater in Europe resides in Madrid, where I now live: Kinépolis, the crowning achievement of a European franchise of movie theaters based in Belgium. Its Madrid enclave has 25 screens, and a couple of its theaters can fit over a thousand people. It has adopted the THX and Dolby surround system as well as digital 3D projection. On the outskirts of the city, within the pompously named “Ciudad del Cine” (“City of Cinema”), Kinépolis is oriented towards the release of commercial features. Unlike countries such as Portugal or France, where they exhibit films in the original language, Spain belongs to that small circle of countries in which dubbing persists, and although occasionally they play films in their original languages, the vast majority of the films shown at Kinépolis are dubbed. Knowing this is essential to understanding the marginalization of a vast amount of European and foreign cinema up to today. Like Americans, Spaniards dread subtitles. It is completely ingrained in our culture and it feels almost impossible to get rid of this crippling mentality.

In the past ten years, over 40 theaters have closed in Madrid. They have been demolished, becoming fast food chains or shopping malls. A few stand as silent witnesses of a vanished era, still looking at pedestrians as though asking for a nod (“Yes I remember you, and I am sorry”). Until the 1980s, the Gran Vía (Madrid’s Broadway) was an incredible concentrated collection of dozens of movie theaters where cinephiles flocked, often to watch more than one movie per day, walking the streets and choosing what film to view based on the name of a familiar star or the large posters hanging over the marquees. Even today, Gran Vía preserves this artsy flavor and a few large theaters survive. However, the culture of moviegoing has mostly moved to the domain of HDTVs and uTorrents.

If you walk through the labyrinthine streets of Madrid’s center, it’s more than likely you’ll bump into the decaying remains of two of those old buildings that formed the Gran Via movie theater district, Cine Madrid and Cine Luna. They are both now closed for good. In fact, a few months ago, a rare “happening” occurred during “La Noche en Blanco,” an all-over city festival that offers madrileños the opportunity to attend a variety of free art, music, theater, and film performances all night. A group of speculators bought the decaying Luna theater and commissioned a curator to program a screening. David Domingo’s Super-8 and 16mm film five-projector avant-garde spectacle was the feature of the night. The idea was that such old-fashioned material was shown in a space that no longer serves its purpose. The same speculators periodically had a variety of shows to showcase the location, hoping to sell the theater—but the cinema has now closed indefinitely. The owners of the Luna theater have sold it to an unnamed corporation that will utilize the building for other purposes.

There are still a few refuges for cinema lovers who want to avoid Ashton Kutcher and Reese Witherspoon. If one wants to see noncommercial movies or avoid dubbing, the Golem and Renoir cinemas comply with the kind of sensibility that their names trigger. There is also another film chain, Yelmo, which owns a downtown theater where movie fans can watch art films like Haneke’s The White Ribbon but also live opera broadcasts, Machete, or the latest James Cameron blockbuster. Cine-clubs and similar social practices are almost gone. One of the last ones to stand was La Enana Marrón (“The brown dwarf”), a small screening space with a bar and couches that showed digital projections of experimental and documentary films. Predictably, it closed three months ago (whenever I went there, we were six or seven at most). The Madrid Cinematheque, like that of any major Spanish capital, is still the cheapest and best way to see repertory cinema. In Madrid though, the program feels rather conservative: how many times must we watch another Chaplin retrospective before we’re shown riskier selections?

Filmmaker Nacho Cerdá recently started an initiative that signals, perhaps, a way to recover the flavor of old cinephilia. He launched the series
Phenomena at the Urgell cinema in Barcelona in an attempt to bring back the old double-feature screenings. Recently, they showed double bills of Jaws and Alien 3, Total Recall and Aliens, and Terminator and Scarface, for example. The house is invariably packed. Appealing to a sense of nostalgia, Phenomena manages to lure audiences that do not only have a cinephilic sensibility but also miss the experience of those days in which seats were not necessarily comfortable and the surround Dolby sound system did not prevent spectators from hearing the whispers of emotion that occasionally emanated from the person sitting next to them as the cranky projector spooled the film. This kind of show makes the cinematic again physical and material—both in terms of its disdain for the pristine, cold perfection of digital equipment and its creation of a communal space for sharing movies. When one reads the texts by the Cahiers du cinéma critics-turned-filmmakers, one feels the rush of blood that each cut, camera movement, and lighting choice propelled in their veins. It was a phenomenological experience (to borrow a Bazinian term) but also a physical one. And this is perhaps how to liberate the cinema from its digital cage: go back in time, in a sense, to remind the spectator of the power, texture, and affect of celluloid.