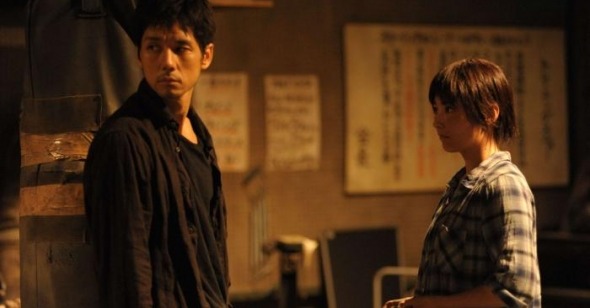 A few weeks ago in Locarno, an acquaintance (I believe it was Filipino director Raya Martin) fittingly described this year’s Venice Film Festival line-up as “a monumental name-dropping.” And boy, was he right. Here are a few names that dropped during the first four days of the festival (pardon, the “international exhibition of film art,” according to the literal translation from the Italian title): Polanski, Cronenberg, Garrel, Soderbergh, Solondz, Pacino, Haynes, McQueen . . . and Madonna. Faced with such abundance, one has to make difficult choices. I resolved to commit to Orizzonti (Horizons), an experimental section that’s historically had surprises in store. This decision was made simpler by the organization’s strict, hierarchical entry system: after a few failed attempts to get into the major screenings, I figured it was time to venture into the unknown.

To start things off, I picked Amir Naderi’s Cut. Almost a manifesto for the section’s avant-garde spirit, the film is quite a strange creature. Though its story was originally written in Persian by the Iranian director, who has lived in the U.S. for the last 20 years, Cut was produced and set in Japan. Such a cultural melange will almost certainly heighten the enthusiasm of those who follow the new transnational doctrine in film culture and its study. Yet, it seems to me that Cut moves in a different—perhaps even opposite—direction from that arena. In fact, Naderi manages to deliver a distinctly Japanese feeling while conveying at the same time a message of faith in cinema as a universal form of art. The plot revolves around a young cinephile of the radical sort named Shinji, whose entire existence is built upon his love for films. No family, seemingly no job, no relationships: his daily routine includes writing a film, visiting the graves of Japanese masters such as Ozu and Kurosawa, running an independent film society, and walking down the streets while blaring through a megaphone about the decline of cinema as art. In one line: consciousness-raising at twenty-four frames per second.

Peculiar as it already sounds, Shinji’s life gets even stranger when he becomes involved with some Yakuza moneylenders. As they abruptly explain to him, his brother used to be part of the organization before trying to use some of its money to fund Shinji’s film—and getting killed for it. Now the criminals expect Shinji himself to pay the debt. Given 14 days to find the money, the young man comes up with a radical solution: every day he lets himself get beaten up for money in the very same bathroom of the Yakuza-owned gym where his brother was killed. Every time he hits the floor, Shinji whispers the title of some old classic to pick himself back up. At night, he projects his film collection upon his own body, to help ease the pain. Eventually, we realize we’re watching a ritual of film faith. Purified from such an ordeal, Shinji’s flesh and blood come to represent both the Japanese ethos of self-sacrifice and the vision of cinephilia as some sort of international moral code.

I was still thinking about that connection while I watched Whores’ Glory from Austrian Michael Glawogger, who came to prominence in 2005 with Workingman’s Death. Divided into three distinct acts, this film offers a cinematic tour of the world of international prostitution. The visuals and editing are outstanding; each of three chapters offers a unique approach to lighting and a distinct color scheme, with recurring details (thresholds, hallways, windows) and a remarkably consistent attention to composition and camera movement. In general, the film manages to remain detached, offering a nonjudgmental approach that cedes the floor to the women, who express their expectations and how they perceive their profession. Yet despite its well-framed, observational façade and formal control, Glawogger’s film made me increasingly uneasy as it moved from Thailand to Bangladesh and then Mexico. The film’s progression is not merely geographical: the relaxed, conversational tone of the first episode gives way to more unsettling depictions in the second and third. The “District of Joy” of the Bangladeshi act looks like a pit of desolation: a labyrinth of narrow corridors and loud arguments where painfully young girls are sold, but where oral sex is considered a taboo because—as one prostitute explains—they must keep their mouth clean to recite the surahs. The same mix of religious commitment and profound misery returns in the third and final act, set in “La Zona,” a fenced red district in Reynosa, on the Mexican border. Here, the film’s intense aesthetic rises to a fever pitch. La Zona is a circle of Hell, a land of no hope where even the humane sadness of the previous chapter is gone. All that remains is a sort of ferocious disillusion, drugs, and the ubiquitous statuettes of the Santa Muerte: the sacred Death.

Throughout, Glawogger’s shooting style is powerful and effective, even enticing. Despite this, I have doubts about the direction of the director’s gaze, as well as our position as viewers. Was Glawogger trying to witness, and to understand, or was he just looking for something to show, to exploit, or even—given the hellish vision at the end—exhibit nothing more than profanity and damnation?

These questions of morality and perspective came back to me as I finally exited Orizzonti for my first major screening. But David Cronenberg’s highly anticipated exploration of the Freud-Jung relationship left me equally perplexed. I’ve heard mixed reactions among the critics as well. On one side: verbose, stiff, pointless. On the other: subtle, elegant, sophisticated. Again, I find myself in the middle. Basically, A Dangerous Method follows the tradition of the historical romance genre. Building upon its solid theatrical roots, the narrative relies on a strong dramatic triangle to hold it together. The script is smooth, balanced, and well paced, even if the actors interpreting it tend to overindulge themselves in the “periodness” of the mise-en-scène (though, truth to be told, Keira Knightley did not deserve her boos—but then, it’s well known that audiences in Venice can be cruelly snobbish).

What troubles me more than the performances, though, is that the film seems to be constantly desperate to find a high-minded intellectual legitimization for everything that happens onscreen, most of which revolves around the attraction between Jung (Michael Fassbender) and his patient, Sabina Spielrein (Knightley), As Otto Gross (Vincent Cassel) manages to persuade Jung to cheat on his wife, for example, the film does its best to persuade us that Jung is actually making a theoretical point against Freud (Viggo Mortensen). As in: the endless possibilities of a freed unconscious versus the suffocating restraints of a repressed sexuality. Now I do not claim to be an expert on the subject, but reducing the conflict between Freud and Jung to a discussion of bourgeois sexuality seems like oversimplifying a bit. Other potential themes (anti-Semitism, the impending Great War) are scattered as hints throughout the narrative, but are never truly explored. So, at the end, I wonder: Is that a strategy to dignify the romantic drive of the plot? But then, why not just downplay the love story and spend more time developing the intellectual premises of the whole affair between the two doctors? Most of all, what has Cronenberg to do with all that? My final impression is that the film, despite its exquisite technique, is too concerned with living up to its characters’ names to develop a strong perspective of its own. The feeling of “pastness” may be effective, the jargon and the psychoanalytical references may be accurate, the details may be vivid—but nonetheless A Dangerous Method feels almost harmless. And not even Viggo’s perfectly held cigar can make up for that.