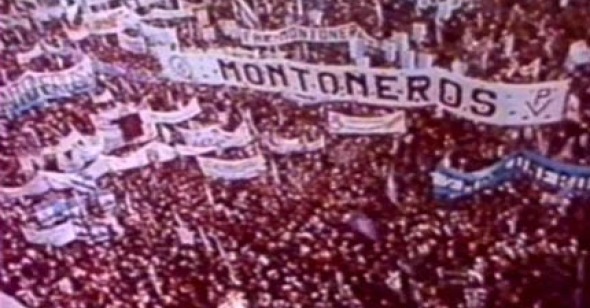 While I may need more time to ascertain whether São Paulo is as full of cinephiles as I assume it to be, after my multiple visits, it is undoubtedly blessed with quality cinemas. The sheer number of its art-house or festival-type screening rooms left me exhausted during the Mostra Internactional de Cinema last October; perhaps even more so during the current international documentary film festival É Tudo Verdade (It’s All True). After having shuttled across town, from downtown’s Centro Cultural do Banco do Brasil (CCBB) to Vila Mariana, I found myself admiring the Cinemateca’s elegantly restored brick building, reminiscent of postindustrial DUMBO in Brooklyn, which could be the envy of any metropolitan city. As I settled in, in a welcomingly air-conditioned sala, I often re-checked my schedule, knowing that with films unfolding simultaneously at four spread-out locations, choosing one often meant not making it to another.

This year, É Tudo Verdade has brought a particular richness of documentary filmmaking that focuses on contemporary history, especially the turbulent seventies, when much of Latin America was engulfed in political violence. Most of the films I saw made use of archival material that would have been government-classified until the 90s. Among them, The Files (Las Carpetas) by Mexican filmmaker Maite Rivera Carbonell, follows a group of Puerto Ricans who, in the 1970s, engaged in leftist and pro-independence movements, and were arrested on charges of "terrorism” and “anti-American activities” (ranging from welcoming Fidel Castro on the island and protesting the American Navy Base to simply being a feminist). After the Intelligence Division was dismantled in 1987, those persecuted gained access to their secret police files. The single police officer interviewed testifies as to the ease with which some of the evidence was fabricated. In her quietly effective film, Rivera Carbonell maps out her subjects’ daily routines—“9:45 a.m. Miguel feeds the cats”; “10:58 a.m. Ismael on the ferry”—to match the grueling precision of agents, while also satirizing the files’ frequent banality. During the post-screening Q&A, the filmmaker mentioned that the persecution of Puerto Ricans by their regime remains a taboo subject (River Carbonell’s film is coming next to the Havana Film Festival in New York, April 14 and 17).

The Open Sky (O Céu Aberto) by Mexican director Everardo Gonzàlez, explores political violence as experienced in recent history by Catholics, by focusing on the story of Mexican Archbishop Romero. Romero’s transformation, from a conservative, in-line with the Mexican government and the Vatican, to his outspoken criticism of the regime, shortly before his assassination, is presented as part of a larger story of Mexican peasant revolt. Farmers, former guerillas, and priests testify to the particular time in history when the Catholic Church opened up to the public, which coincided with labor activism. The priests engaged in social causes were targeted as communists, as in other Latin American countries. While the film is somewhat repetitive, with too many reminiscences of the Archbishop, its ample use of audio recordings of Romero’s rousing speeches, coupled with archival footage of the Mexican military’s sweeping villages and of the student massacres, makes for chilling viewing.

The Cultivation of the Invisible Flower (O Cultivo da Flor Invisível) by Juan Alvarez Neme, returns to one of the most extensively explored topics in contemporary Latin American history—that of “the disappeared.” FAMILIARES, a Uruguayan organization, resembles the Argentine Mothers of the Plaza de Mayo, whose members pressure the government to investigate political murders. Thirty years on, the elderly Uruguayan women continue to demonstrate, protesting the amnesty, or the Expiry Law, and demanding that political crimes committed under the dictatorship be prosecuted. Their efforts meet with some success: a number of secret graves are excavated, outside a military base, and their human remains are identified. To some mothers, the discovery comes as a shock as much as a relief (one comments on “having a live son and being given a bag of bones”). The documentary is mostly an examination of individual mothers’ coping mechanisms, from keeping a son’s music recordings, to locating a safe house in Buenos Aires, or attempting to confront an army commander responsible for a child’s death. The film also serves as a reminder that politically motivated kidnappings occurred not only in Argentina, but were widespread throughout the continent.

Mario Bomheker’s Soul Searching (Em Busca da Alma) filtered the period through the prism of an individual: Miriam Pillellensky, an ex-member of an Argentine guerilla group, was shot and captured in a mountainside training camp. Bomheker’s film is set up rather conventionally, as a sit-down interview. It does, however, explore a new angle: a story of a young guerilla publicly denouncing her activities, as Pillellensky did on television in 1976, in exchange for freedom. While in captivity, Pillellensky witnessed death and torture, and was repeatedly raped, traumas with which she still copes in analysis, four decades later. She was not forced to betray her comrades, and has no doubts about choosing her life over a political cause, but nevertheless feels haunted by the past, having survived when so many died. Her stance towards radical youth movements, particularly those that take up armed struggle, is critical. She interprets her interest in guerilla warfare as representative of a deep need to belong, typical of adolescent or college youth, rather than political acumen. While Pillellensky’s dream of moving to Israel materialized (she is of Jewish descent), she refused to grant her son’s wish for active military duty with the Israeli army, convinced that the young are merely “cannon fodder,” their naïve idealism exploited by political leaders.

Argentine filmmaker Andrés di Tella also took as his starting point a young woman’s involvement in a radical political group. His The Montoneros (Os Montoneros) shows a profound psychological complexity, all the more remarkable since di Tella made his documentary in 1995, when the subject was still relatively fresh (The Montoneros was part of a di Tella retrospective at É Tudo Verdade, comprised of eight films). The film’s main protagonist, Ana, is an ex-member of Os Montoneros, a Peronist youth movement, later rejected by Perón, whose guerilla actions included kidnappings and executions of Argentine political and military leaders. Forced into hiding, Ana was captured and held in the infamous military school Escuela de Mecánica de la Armada (ESMA), in Núñez, a neighborhood of Buenos Aires, where some 3,000 political prisoners were murdered. Ana is one of the rare survivors, and as such, similarly to Pillellensky, is haunted by guilt.

Similarly to Bomheker’s, di Tella’s documentary emphasizes the vulnerability of young revolutionaries: making up the rank-and-file, they are often called to take on more risks than the leaders, and are the first to be sacrificed. But Ana’s story is more than a tale of an outraged young student—it is also a poignant and painful love story, from her courtship by a young activist, to her growing exhaustion and desperation after she gives birth to her first child (she will miscarry her second pregnancy while on the run). Ana is ultimately rejected by her lover, who cannot tolerate her growing desire for normality. Considered a traitor, she is doubly ostracized, forced to lead a clandestine life, while no longer belonging to any movement. Her case exemplifies perhaps the thorniest aspect of political secrecy: those who leave an underground group may end up feeling threatened not only by the regime but also by the former colleagues wishing to protect their safety. The greater portion of the film is dedicated to reconstructing Ana’s state of mind, as she revisits her childhood haunts and hiding places. In contrast, her captivity at ESMA is recalled obliquely: we don’t know what tortures Ana endured or witnessed. Her mother tells of a young torturer falling in love with Ana, paying visits to the family house, in the company of Ana and other officers.

A mysterious lacuna emerges at the center of The Montoneros; the questions of who Ana ultimately is, and how she coped and survived, remain unanswered. Ana herself at times wonders what she’s done to deserve to live. “Who am I?” she asks. Di Tella does a remarkable job of bringing us close to the mystery of Ana, without yielding it entirely. In a brief testimony by a past professor of Ana’s, we learn that she gave him up to the authorities. “We’re still friends,” he says, adding that no one may judge a prisoner under torture. Paradoxically, Ana is told that her partner, who was killed, might have survived, had she turned him in. Ana will never know the truth, and perhaps neither will we, but di Tella’s nuanced, emotionally gripping portrait raises philosophical and moral questions that most of the documentaries about leftist political movements from the 70s tend to ignore. The Montoneros investigates not only the criminality of the state, and the ethos of the guerilla groups but also the fragility of an identity forged under extreme circumstances, with incredibly high stakes, and little to no room for self-examination.