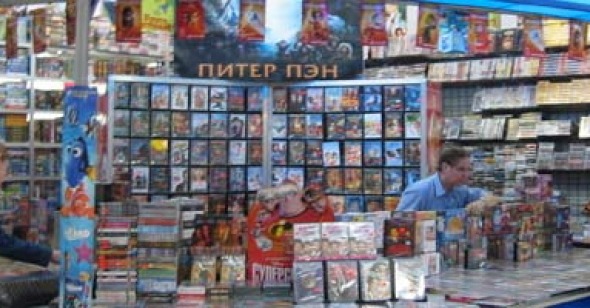 Oh, how quickly home viewing standards plummet. Last September I was living in New York City, scouring used bins for half-priced Criterions and refusing to rent MGM’s erroneously aspect-ratioed Bergman series (which my local store kept on the shelves despite their being recalled). Now, eight months after moving to Moscow, I’ll pay to watch some dude’s camcorder capture of The Aviator’s opening night. Furthermore, I’m starting to like it. I get popcorn crunching, cell phone conversations, silhouetted heads blocking the screen, and sharp-angled re-framing, all for 120 rubles ($4) or less. Most Russian bootlegs don’t sport all of these features—some even boast of “Dolby Surround Sound” and “high-quality transfer,” if that’s important to you. I’ve discovered that it’s not for me—not when this might be the only format in which I can see the films this year, and not when these reliably watchable DVDs cost significantly less than the box-office price tags on Russian-dubbed Hollywood bombs recouping their investments overseas. I’m sure that Sahara can only be appreciated on the big screen and all, but why bother when better movies still look good computer-sized and pixelated?

Bootleg DVDs are popular everywhere, but Russian bootlegging is unique in that it’s basically legitimate (legitimacy here being a very fluid term). Though it’s technically illegal to make them, it’s apparently legal to sell them. Shopping malls are erected to hawk them. Websites deliver them. Vendors display validation licenses and will even write you a receipt. Local manufacturers and distributors encrypt adverts to precede the DVD menu, and contact info appears on the packaging. You can’t go anywhere in Moscow without seeing either beer or bootleg media for sale, and considering the political clout of the beer lobby, that’s impressive coverage for a supposedly unregulated industry. When the black market helps drive the economy there’s no sense in cracking down, so they’ve amped it up. Make more copies, open more kiosks, put a stamp on it, and call it good. And, presumably, let some big cats in on the action, which might be why all these kiosks, regardless of whether they’re on a main drag or in a dingy, desolate back passageway, charge about the same price for Kill Bill.

Though the kiosks are convenient, they rarely have what I’m looking for. Their stock is for very young, very mainstream tastes, and quality is a crapshoot. So, like everyone else, I go to Gorbushka. Ask a Muscovite where to buy a DVD and nine out of 10 will say Gorbushka. Ask them where to buy a television and they’ll say Gorbushka. Ask them where to buy a humidifier or sewing machine—again, Gorbushka. Wal-Mart would kill for this kind of word of mouth. Once a muted market in a residential complex, this multi-structured, many-floored behemoth is now literally taking over the neighborhood. Ad-hoc card-table vendors corridor the one-block walk from Bagrationovskaya metro station to the red-bannered buildings of Gorbushka. Entrance to the media market is through an archway and past a beer garden filled with chain-smoking teenagers. Inside is a football field of discounted CDs, DVDs, videos, video games, and software. Most are bootleg, but some are legit. Prices are slightly better than the street kiosks, but despite its freewheeling reputation, Gorbushka’s are just as rigged. Apparently there was a “crackdown” a few years ago, after which vendors sold pretty much the same stock at the same price as their competitors. But you can still find films here that no one else in Moscow has-—you just have to learn which vendors are the suppliers. And since most of the cases on display are meant to lure the same young and mainstream buyers as the kiosks, you also have to ask—no small task when you know about 50 words in Russian, but I’ve managed with “Subtetli po-angliski?” and a smile. Since the specifications on the box are often outright lies, friendly vendors will even play the discs for you. At Gorbushka I bought all four volumes of Masters of Russian Animation—an American-financed product whose discs retail for $25 each in the states—for about $25 total, and they’re perfect. About three weeks after their domestic release, I took home good copies of I Heart Huckabees and Closer for $4 each. I also found a region 5 copy of the Russian blockbuster Night Watch with English subtitles at the same price.

Another destination is Ismailovski Park, an open-air market dominated by Russian kitsch and Soviet-era antiques that also has a handful of well-stocked, English-speaking DVD vendors. Browsing involves flipping through endless cardboard sheaves, as discs are sold without plastic cases; either this frugality conserves more than I realize or these guys are free of the middlemen that standardize Gorbushka’s prices, because DVDs here are down to $3 and change. Maybe it’s because of this space-saving, but they also seem more willing to stock slightly older films, and if you ask they’ll produce sheaves of Russian and French movies from the back of the table. After flipping through copy after copy of Ocean’s 12 I came across Primer, which I immediately paid for, pocketed, and chaperoned home. The normally knowledgeable vendor had no idea what it was or where it came from, and I haven’t seen it anywhere in Moscow in the three weeks since.

As if three dollars were a prohibitively expensive price cap that even my professional calling couldn’t bring me to cross, there’s also a website called dvdlavka.com that sells them for as little as two and change. These hip capitalists understand the advantage of selling in bulk at smaller margins of profit: the more you buy, the cheaper the cost per disc. They even deliver to your door for no extra charge. Is this really Moscow? Well, yes, because not every disc is high quality, foreign-language releases have no English subtitles, and of course there’s no returns on faulty copies. But did I mention that DVDs cost two and change? For the price of a single new DVD I got 10, including flawless copies of The Stunt Man and The Thin Red Line, and a deeply flawed, flattened version of last year’s deeply flawed The Life Aquatic with Steve Zissou, complete with an affixed “For Your Consideration” tag that taunted the film’s every wrong move.

Even legitimate Russian DVDs (yes, there are legitimate Russian DVDs) are significantly cheaper than in the U.S.—normally around $10—and before I return to New York I plan on stocking up on films I won’t be able to buy, rent, or see anywhere else. Some older Alexander Sokurov films were recently issued, as was Alexsei Guerman’s complete filmography, the latter all-region but without English subtitles. These legit releases are actually harder to find than bootlegs, but a subterranean store near the city center named Transylvania is a good place to start, as are the emergent mini-chains Titanic and Soyuz. In fairness, the rarity of rental stores can be traced in part to the success and prevalence of bootlegs. A few more have opened in the short time I’ve been here, so perhaps a transformation is afoot, but unless rental stores become as ubiquitous as bootlegs and beer—and their appearance is accompanied by a sudden respect for the rule of law—I don’t expect much to change.

Returning, briefly, to that camcorder copy of The Aviator. I’ve been told that I really ought to see the film in its intended scope, at its intended volume, and untouched by the bored silhouettes of multiplex-goers. A year from now I might do just that, and perhaps I’ll be horrified by how much my bootleg copy compromised Scorsese’s vision. But I doubt it. I know I didn’t see it the right way, and I know I didn’t catch every foot of that big screen, but I saw enough to know that no amount of peripheral magic could have salvaged the big dead fish at its center. Funny how digital technology makes a richly financed film viewable to people halfway around the world within a week of its opening, the speed and surreptition of its capture inadvertently paring the film down to simple narrative—its spinal column of writing and acting and editing— and thus exposing its utter failure. Back in New York I would have paid $10.50 to bask in its Technicolor, but I bet I’d have felt just as robbed as I did after paying my Moscow vendor three bucks. My vendor, at least, made no claims above that my copy would be listenable in its original English.