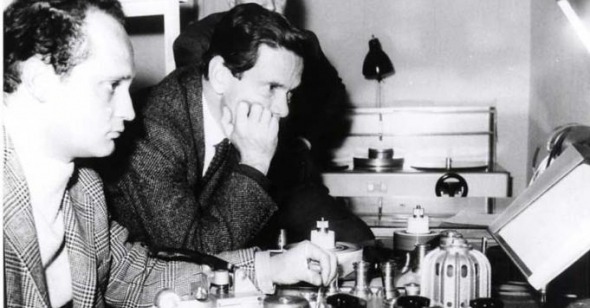 Desert of the “Real”
New York Film Festival’s Views from the Avant-Garde, 2009
By Genevieve Yue

Nestled in the middle of the New York Film Festival, the Views from the Avant-Garde program, now in its thirteenth year, has become something of a lightning rod for experimental work. For better or for worse, the rare, uncategorizable, and often difficult films it features are crammed into a dense, two and a half-day screening schedule that challenges the endurance of even the most seasoned viewer. In previous years programmers Mark McElhatten and Gavin Smith organized their selections with session titles and descriptions, but this edition, which did away with both, left the work of finding the underlying logic up to the audience. Though this may seem an unremarkable omission, the lack of a suggestive framework for viewing meant that a number of experimental mainstays got lost in the fold, and the works that could otherwise stand alone, namely ethnographic excursions and understated essay films, were the ones that received the most attention.

If nothing else, however, the emphasis on documentary indicated an important trend in an ever-expanding idea of what constitutes avant-garde practice. Giuseppe Bertolucci’s La Rabbia di Pasolini, a liberal reconstruction of Pier Paolo Pasolini’s 1963 short, Rage, was one such film. Along with Serge Bromberg’s half-reconstruction Inferno by Henri-Georges Clouzot, which screened in the festival’s main section, Rage marked a strange middle ground between auteurist imprint and contemporary hagiography, with the film “restored” to its original, yet never fully realized, vision. In a clumsy attempt to balance out the politics of Pasolini’s indictment of postwar Italian liberalism, the original Rage, released in 1963, was forced to share screen time with Giovanni Guarschi’s right-wing second half, and was either panned on account of Guarschi’s diatribe, or ignored, most significantly by Pasolini. On the rare occasions he would speak of the film, he admitted it was “a rather confused, irrational idea which is not yet well defined or determined”—no doubt a difficult matter for a film restorer such as Bertolucci. And while the new Rage attempts to map out the long process by which the film was made and unmade, Bertolucci only succeeds in his failure to adequately reconstruct an impassioned, rambling, and yes, enraged polemic against Italy’s apathetic Left. Aside from the original and extended sections based on Pasolini’s collected bits of newsreel footage, overlaid with newly recorded readings of his poetry and music selections, the most compelling additions are the scathing attacks launched on Pasolini himself. In one especially disturbing and pointedly homophobic clip, a comedy troupe performs a satire of his films, and later, when Pasolini sits down for an interview, the thoughtful, even pace of his delivery underscores the seriousness of the threats he was receiving at the time, particularly as the circumstances of his untimely death still remain unknown.

The question of historical record was treated far more matter-of-factly in Pim Zwier’s Sarah Ann, a stark 35mm collection of shots overlooking the Clifton Suspension Bridge near Bristol. With each image, a different newspaper article is read describing the improbable survival of Sarah Ann Henley, who in 1885, distraught after a lover’s quarrel, leapt from the bridge and fell 250 feet onto a muddy riverbank. Zwier’s film is oddly bald; the florid language of 19th-century journalism (“There being a slight breeze blowing on Friday the young woman’s clothes were inflated and her descent was thereby considerably checked”) stands in striking, even comical contrast with distanced, black-and-white views of the bridge. From Zwier’s vantage point, the whole length of the fall can be seen, and perhaps even the soft mud from which Sarah Ann was “extricated,” yet he eschews any other attempt to get closer to what actually happened, suggesting the artificiality inherent in all documentary techniques: even at this great remove, the camera always gets in the way.

Some of this distance was also imparted in Harun Farocki’s view with In Comparison, a straightforward look at brickmaking in different parts of India, Burkino Faso, Germany, and France. From the ground up, literally in this case, laborers carry out their work, and whether a shovel tossing damp clay to the roof of a building or a robotic arm angling a precise wedge, all of Farocki’s sites are equally astounding and resounding, joined together in a hypnotic rhythm of work. Despite its title, the film actually doesn’t demand comparison the way Farocki’s more pointed documentaries and installations have done previously; in fact, aside from twenty title cards identifying locations and line drawings of rudimentary brick shapes, there’s hardly any speaking at all. Instead, the film marvels at common routine. But In Comparison doesn’t sidestep its attendant problems of industrialization, immigration, and gender. From the whirring sounds of a conveyor belt to the clack of stacked bricks held atop a woman’s head, it listens to the process of brickmaking in whatever form it takes, and by removing spoken language, Farocki steers our attention to the basic structure and shape of the societies built upon these discreet, humble, and wordless (though still semantic) little blocks.

Part journey, part psychedelic flight of fancy, and all in all a purposeful break in rhythm, Ben Russell’s latest “trip,” Trypps #6 (Malobi), was a work of ecstatic ethnography. Clearly indebted to Jean Rouch’s Les Maîtres fous, a midcentury document of West African Hauka mystics exorcising the demons of their colonial overlords, Russell allows his camera to fall into a similar hypnosis. At the beginning, he appears in front of his lead figure, the orange jumpsuit-clad Benjen standing in the doorframe of a hut, hastily snapping a miniature clapboard. The gesture elicited a few laughs, a token nod to conventional filmmaking in a determinedly unconventional setting. As the film progresses, Russell’s camera loosely follows Benjen, who has put on a clown mask, and his similarly costumed companions as they make their way to the festival of death in the village center. In a single, weightless steadicam shot, Russell swings around trees and houses, circling around the main event instead of directly approaching it. While the villagers flurry themselves into an orgiastic danse macabre, which Russell joins only at the very end, his concentration leads elsewhere to the sustained revelation of unflinching vision itself.

With the passing of several experimental filmmakers in recent years, including Mark LaPore and Bruce Conner, Views has also become a de facto memorial space for departed filmmakers, and this year’s edition was no exception, featuring a program of Canyon Cinema co-founder and West Coast iconoclast, Chick Strand. Though the mood was somber, with many of Strand’s former colleagues and friends in the audience, the wit and wonder of her films made for one of the weekend’s most dazzling sessions. From the evaporating dream of Kristallnacht (1979), where the soft waves and murmurs of female bathers (no one comes close to Strand in photographing water) gradually gives way to darkness and the ominous sound of approaching trains, to Loose Ends (1979), a found-footage fairy tale that describes the making of a film at the same time that it undoes it, Strand is as seduced by images as she is aware of their cost. In the latter, she draws a chilling connection between the abstracted bodies animated by precinematic pioneer Etienne-Jules Marey and the scene of real animal slaughter in Georges Franju’s Blood of the Beasts. In her experimental documentary Fake Fruit Factory (1986), the Mexican women workers delicately paint dark seeds on the surface of papier-mâché watermelons somehow more luscious than the real thing. Their merry chatter, surprisingly frank, lends the film an easy musicality, though as they too enter the water on a rare day off, we learn that their American boss has alighted with a blonde croupier from Las Vegas, and his Mexican wife will soon take over the factory. The lives of these women bear a strange fruit, lovely but not nourishing, and despite the bitterness, Strand manages to linger on its sweet, ephemeral fragrance.

Fern Silva’s Sahara Mosaic also reworks the experimental travelogue by describing the travel of an idea, or an idea of travel. From Egypt to the Vegas Strip, the night sky lit with neon camels, a sign advertising the McArabia special, and a double-take-inducing advertising image of a smiling man with two mouths, Silva journeys far and wide to describe the sordid everyplace of the tourist. Glimpsed in rushed, off-kilter horizons, the Sahara, if we ever have a chance to see it fully, is inevitably tangled with the ways it is packaged and sold.

Deborah Stratman takes a more sustained look at the notion of American freedom in O’er the Land, which stood out among this year’s selection as one of the strongest and most timely works. As an essay film it’s enigmatic, and it’s not always clear how the dispersed sections of the film are meant to fit together. The film veers from the absurd (a French and Indian War reenactment in Kokomo, Indiana and a Midwestern high school football game) to the sinister (a roving militia of self-appointed border patrol guards) to the darkly beautiful: a burning field lit with the fire of amateur flamethrower enthusiasts. Stratman refrains from outright commentary, and aside from the occasional disembodied voice describing the virtues of RV travel or the privileges of the Second Amendment, she’s more interested in the moments when people don’t speak. There is one notable exception, however: Lt. Colonel William Rankin, whose oaky drawl on Stratman’s answering machine is heard in the first scene, receives a lengthier treatment midway through. Voiced by an actor, his account of his miraculous, Sarah Ann-like ejection from a plane and subsequent 10,000-foot dive is told in gripping detail as Stratman fills the screen with the image of a turbulent sky. It's Rankin’s view perhaps, but also a great wide open that’s available to all of us, the imperiled hero freefalling “o’er the land of the free and the home of the brave.” This voice returns us to the one at the beginning, where, over an image of smoking, twisted metal lying on a forest floor, the real Rankin politely declines an interview. The elusiveness of a singular argument in Stratman’s film, and the way she circles around her subject, might lie in this one token message, Rankin’s unwillingness to speak, or the unspeakable nature of this vision of America. Only through play-acted battles (loaded with real bullets) and imagined enemies can this theater be enacted, this coming disaster approached.