Did You Wonder Who Fired the Gun? 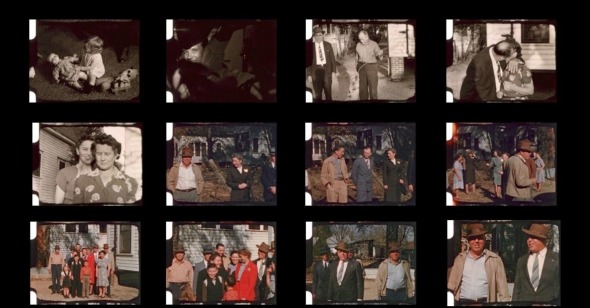 Histories of Violence
Matthew Eng on Did You Wonder Who Fired the Gun?

Two ghosts haunt the frames of Travis Wilkerson’s first-person documentary Did You Wonder Who Fired the Gun? The first ghost is S. E. Branch, a virulent racist who worked as a grocer in the tiny Alabama town of Dothan and was Wilkerson’s great-grandfather. The second ghost is Bill Spann, a married Black man who died in a derelict wing of a segregated hospital in October 1946, two days after Branch shot him twice in his neighborhood market. Branch claimed self-defense and received a charge of first-degree murder. Though the crime was reported in local newspapers, no trial was ever held. In his true-life American horror story, Wilkerson returns to Dothan to train his gaze simultaneously on our country’s past, present, and future. Over the past year and a half—with its gruesome murders and savage assaults by police, necessary riots and demonstrations, toppled monuments, nauseating trials, and augmented pleas for abolition—my thoughts have repeatedly returned to Wilkerson’s film, which raises vital, unsettled questions about the role white Americans might play in the midst of a nationwide racial reckoning.

Returning home to the scene of the crime, Wilkerson seeks clarity on the killing, which occupies the center of his 2017 feature; the very memory of this small-town felony might have easily been hushed by the passage of time were it not for the filmmaker’s digging and the clear-sighted testimonies of those who remain to tell the tale. Then again, the crime remains so notorious in the town that, at one point, a longtime neighbor who resides by the now-shuttered family grocery refuses to discuss it with the director or even appear on camera, no matter the demises of its key players and the gains of various, Black-led Southern movements.

“I’m not a fool. I know what kind of person he was,” Wilkerson’s mother or aunt—the director eschews title cards—says of their repugnant grandfather in one of the film’s early, spare usages of talking-head interviews. In death, Branch, a bald and corpulent brute seen only in photographs and home movies, has become a figure of mythic notoriety. At one point, one of the surviving women of Wilkerson’s family wonders aloud what other unknown, newspaper-worthy misdeeds Branch might have committed in his day. This is asked with a laugh, which might seem flippant for the subject at hand, but this laughter will later be given a sobering and deeply personal reason for reconsideration, recontextualized as a shield, one of many ways in which Wilkerson confounds our expectations throughout his revealing film.

Wilkerson is not beholden to any one mode of nonfiction cinematic storytelling. The film’s only constant is the calm, clear tone of Wilkerson’s discursive voiceover, a feat of sustained and restrained narration that comes to evince a cold anger at the injustice committed by a monster whose blood is the same that runs through his own veins. When Wilkerson describes being questioned and chased by menacing, white supremacist thugs later in the film, his vocal performance takes on chilling results, bating the breath as effectively as any recent thriller. Wilkerson’s methods are essayistic, critical, anthropological, investigative, expressionistic, epistolary, musical, and self-reflexive; his canvas appears at once as intimate as his rural setting and as big as the guilt, Wilkerson’s own, that comes to permeate his narration. His nuanced film is never simply one thing.

There are true-life tales nested in true-life tales and critiques tucked inside critiques in Did You Wonder Who Fired the Gun? Wilkerson has made a film that actively seeks to disrupt the mindless repose of a viewer primed to sit back, relax, and detach. His techniques pull us closer to the screen so that we can watch with disgust and humbling awe as the filmmaker connects his great-grandfather’s murder of a Black man to the lie of To Kill a Mockingbird’s Atticus Finch, the virtuous white lawyer who becomes the unfaltering savior of a wrongfully accused Black man in 1930s Alabama. Wilkerson dismantles the pipe dream of Harper Lee’s iconic hero, seen in warped, tinted images that function like an ethical x-ray, and admits that the tyrannical, segregationist Finch unearthed in Lee’s legacy-upsetting 2015 novel Go Set a Watchman, Mockingbird’s previously shelved first draft, is both a more honest depiction of white, Southern manhood and a spiritual counterpart to his own great-grandfather. The eagerly accepted myth of Atticus Finch flatters and clears whiteness, eclipsing actual instances of bravery that Wilkerson cites in his film, from Rosa Parks’s heroic investigation into the rape of Recy Taylor to white civil rights activist William Moore’s lonely, fatal march to Jackson, Mississippi, immortalized in the folk tribute by Phil Ochs that gives the film its title. What use is squeaky-clean Atticus Finch to those living amid a public resurgence of white Southern nationalism and the mainstreaming of a poisonous agenda that has been adopted by another of Wilkerson’s aunts, a red-pilled, white supremacist crank estranged from the fold?

Music is also essential to the tone and structure of the film, creating a soundtrack of resistance through a chopped-and-screwed remix of Billie Holliday’s forlorn “Strange Fruit,” played over monochromatic images of Alabama woods whose leaves have been washed of the blood of Black lynching victims. There are abrupt and purposely jarring cuts to a bright, white screen filled with the sound and printed lyrics of Janelle Monáe’s “Hell You Talmbout,” which protests and commemorates the numerous murders of African Americans by law enforcement officers and anti-Black terrorists. Through its repetition, this propulsive and galvanizing Black Lives Matter anthem becomes the unremitting conscience of Did You Wonder Who Fired the Gun?

It is this same conscience that inspires Wilkerson to cede a large swath of his film’s running time to civil rights activist Edward Vaughn, a contemporary of Martin Luther King, Jr. and the owner of a home museum devoted to preserving Black American culture. Sitting on a couch beside a Tuskegee Airmen baseball cap, Vaughn provides an oral history of his personal and political roots, from a white police officer’s attempted rape of his mother to his family’s decades of militant resistance to his own beginning as a teenage activist, during which he led a strike at his segregated high school. Throughout Vaughn’s testimony, Wilkerson shows us images of the mementoes that crowd his museum: a poster for the original Broadway production of Ntozake Shange’s for colored girls who have considered suicide / when the rainbow is enuf, framed photos of figures from Malcolm X to Pearl Bailey, and campaign materials for Vaughn’s run in local politics. In this passage, Wilkerson identifies a shared lineage of Black American artistic, cultural, political, and social achievement that has been marred by the inequality and brutality with which the rest of his film wrestles.

At various points, Wilkerson lingers on the image of an endless, twilit road leading to… where, exactly? The road is a clear allegory for the racial imbalance the pompous American experiment was founded upon and which it necessitated. And yet the film’s most unsettling implication is that its destination—which is to say its solution—is nowhere in sight. There is no gesturing toward a more humane world, no promise that it may be realized in this decade or the next.

What does it mean to be a white filmmaker portraying the remnants and perpetuation of anti-Black violence in America with such resounding cynicism? There are some who may question Wilkerson’s choice to occasionally center his own shame, which quivers with a passionate intensity that arguably betrays its very sincerity and self-awareness: perhaps it is simply not a white man’s place to make promises about a future he cannot guarantee, one in which Black lives will be protected and uplifted. Wilkerson, seen at protests in the film, knows that he can only contribute to work, to movements, being led by Black activists, that their tireless efforts are the only ones that can deliver America to a more just place. In light of more senseless atrocities committed against Black individuals by police—not to mention more deaths by a disease that disproportionately impacted Black Americans and other people of color long deprived of health equity—these truths seem only more evident and obligatory from the vantage of 2021.

There is a current tendency of the white (or white-passing) ally to seek absolution—to reach out for vapid confirmation that they are not the problem, that because one is not a violent actor of racism then one does not profit from the oppression and exclusion of a racist order. This is self-preservation through exoneration, one that comes at the expense of participation in the process of advancement and abolition; it entails the fallacy of hiding behind a banner of difference—be it religion, sexual orientation, or ethnicity—in order to pretend that whiteness does not implicate its possessors and beneficiaries each and every day as a way of life whose privileges we accept while feigning blindness. This performativity—understanding that we will never understand, but still standing up to post a black box on Instagram—precludes us from actually fighting the same fight in which all oppressed peoples should be engaged. How, then, can white Americans move forward as faithful, self-effacing allies? Maybe, Wilkerson argues, by turning back to—and taking responsibility for—past disgraces. And, indeed, Wilkerson’s film is never more tragic than in its excavation of a long-departed life that was unjustly stolen.

In Did You Wonder Who Fired the Gun?, all roads that Wilkerson travels lead time and again to Bill Spann, whose only proof of existence is his death certificate. Wilkerson knows that a film cannot revive the dead or right the wrongs ingrained in a nation’s fabric. But a film can offer its own kind of proof. And such proof can take many forms. It can be the home movies that have preserved one life, juxtaposed with the narration that memorializes another, each life belonging to a family, one that continues and one that could never be the same, broken by the sin of the other. It can be the simple act of saying the name of Bill Spann, a human being who existed. It can be turning one’s camera on the heartbreaking indignity of an unmarked grave that holds not just a body but a human being lost in the crevasses of history.

Wilkerson makes us acutely aware that this history of violence will itself be lost to time if white Americans allow it. If we fail to act as lives are taken. If we refuse to renounce the safeguards and defenses of a carceral state that was never intended to protect all Americans, insisting on sacrificing human rights and stalling Black liberation in order to cling to the sense of security that a “tough on crime” regime offers as a smokescreen to its paranoiac white citizens. If we continue to pay lip service to a hazy belief in progress but make no meaningful changes to the areas of our lives in which equitable progress might actually be achieved. If we refrain from vocally disagreeing with those who sit beside us at barbecues, holiday functions, or the nightly dinner table, cravenly choosing idle peace over productive conflict. If we remain content to sit and do little more than wonder why it has to be this way, knowing change is necessary but refusing to first change ourselves. If we sympathize with the cursed without recognizing that it is we who perpetuate—who are—the curse.