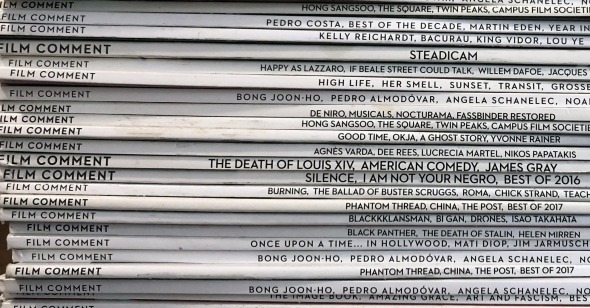 The best Film Comment covers of the twenty-first century, in the humble opinions of the editors who chose them. Read Imogen Sara Smith's appreciation of Film Comment in the 21st century.

Beau travail, May/June 2000
"My first issue as editor. It was a special cover in that since the official stills available for the film were so few and unsuitable we asked New Yorker Films for frame enlargements, which designer Paul Volpe selected. These images are nowhere else to be found. (Later we heard that Chloe Sevigny was such a fan of that cover that she had it pinned up in her apartment.)"

The Royal Tenenbaums, Nov/Dec 2001
"One of the few times we used a posed photo-shoot image. If I remember correctly, it’s by Richard Avedon. We were told it was an exclusive, so we were disappointed to see it turn up on the cover of Sight & Sound a few months later."

Femme Fatale, Nov/Dec 2002
"A favorite—right film, right image. As with Beau travail, we convinced Warner Bros. to give us a specific frame enlargement. I always felt the cover should be an image from the film rather than an airbrushed portrait of the star or the director."

Kill Bill Vol. One, Nov/Dec 2003
"Speaking of airbrushing: it's a great shot, but you should have seen it before the Weinstein publicity team insisted on removing all the bloodstains on the yellow jump suit."

Marie Antoinette, Sept/Oct 2006
"And speaking of Tarantino, this cover is special because during the convenience store scene in Death Proof, the camera pans across a magazine rack and this issue is prominently placed, along with Fangoria and a few other film magazines. Hearing the Cannes press screening audience laugh at that was a high point."

Beasts of the Southern Wild, May/June 2012
"I haven't seen the film since it came out, so I have no idea how well it holds up, but this is a perfectly designed cover and a perfect image."

The Master, Sept/Oct 2012
"The same applies here; it's one of the best images from a film we ever got our hands on, and Joaquin Phoenix's brooding look is a knockout."

Apichatpong Weerasethakul, Mar/Apr 2016
"Many of my favorites are first-timers: coinciding with the U.S. release of Cemetery of Splendour here was Apichatpong’s cover debut after, oh, a decade and a half of filmmaking. I also felt it represented a kind of cinema we hadn’t put center stage much."

Agnès Varda, Sept/Oct 2017
"Salut! Cover story upon the release of Faces Places was a lovely conversation over tea with Agnès, laced with profundities and cats. Her first after, oh, six decades of filmmaking."

Hong Sangsoo, Nov/Dec 2017
"Hong at Lincoln Center (shot by the great Godlis). This stood in for a body of films whose number and nature (as with Varda) seemed to be held against him."

Spike Lee, July/Aug 2018
"This iconic cover (an overused word, but look at it) around the release of BlacKkKlansman could have won an award for our incredible art director, Kevin Fisher, whose redesign brought us to new heights. Also, first cover for Spike after, oh, three decades of filmmaking."

Parasite, Sept/Oct 2019
"I’d like to think we were ahead of the curve with this cover. Bong had won at Cannes, but who knew the successes yet to come? This came between the covers for Once Upon a Time… in Hollywood and Little Women—one of my favorite runs."