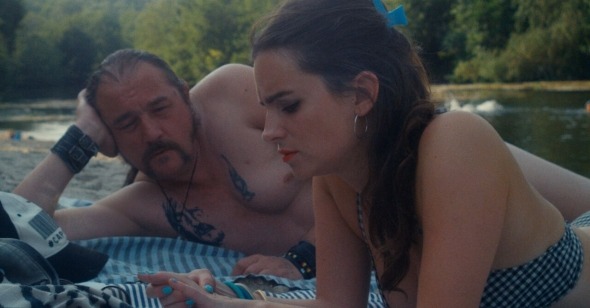 Carwash centers on the kidnapping of a carwash owner in the rural region of Poitiers, but from the onset you would never know such an occurrence took place at all. There is no tense skirmish, no threat made at gunpoint, simply a genial agreement between the idiosyncratic trio of non-actors followed by director Claude Schmitz. The filmmaker studies the surprisingly amiable bond that develops between the long-haired, craggy-faced Thomas (Thomas Depas) and the mild-mannered Francis (Francis Soetens)—two lumpy figures with constellations of tattoos on their arms—and their “hostage” in the loosest sense, Wilfrid (Wilfrid Ameuille), a quirky, bespectacled hermit with an ever-present twinkle in his eye who loves to wax poetic about his beloved garden and compose poetry. Wilfrid gamely allows them to purloin smatterings of coins from the carwash each day, slowly building their till, on the accord that they keep him company in his sprawling countryside estate. The arrival of Lucie (Lucie Guien) and Hélène (Hélène Bressiant)—the men’s girlfriends—throws a monkey wrench into Wilfrid’s contented arrangement. Serving more as decorative objects than fully fledged characters, the women satiate the men’s ennui or function as bank tellers, keeping track of their stash. They become suspicious of Thomas and Francis’s arrangement with Wilfrid who is, by all accounts, supposed to be their prisoner.

From here, Schmitz whittles a leisurely yarn with only the most threadbare of narrative action. He shot with no formal script or framework in mind, content to merely observe in fixed, distant shots the desultory minutiae of his hapless subjects. Carwash revels in the particularities of fleeting moments such as Thomas boisterously singing along to Jacques Brel, his girlfriend pretending to lose her ring so that he will buy her a new one, or Wilfrid’s joy swimming in the lake for the first time in eight years. The comic lyricism that runs throughout Schmitz’s film is drawn from the atomic eccentricities of his lonely protagonists: Thomas’s idle bickering with a local townsman, Wilfrid’s scrupulous instruction on how to properly hoe to two apathetic teenagers, or the way he behaves like a jilted lover when Lucie and Hélène arrive on the scene. Schmitz's Carwash moves at a gentle pace, basking in the trio’s effortless repartee and their droll, improvised rhapsodizing about love or morality. At times this languidness threatens to tip into the banal, but the screwy conjuncture of a half-hearted abduction and furlough from the modern world keeps the film afloat, especially as beheld by Schmitz’s crisp eye for detail.

Schmitz shoots in a 4:3 Rohmerian style with a 16mm lens that lends a pleasant charm to the hushed, sun-dappled landscapes of Wilfrid’s spacious chateau or the majestic spires of the Poitiers Cathedral the group visits in the quaint, busy town. He often frames these georgic vistas in distant shots where the vast surroundings of looming emerald green trees and pale yellow plains dwarf the small figures of his characters. Carwash breathes with a quiet stillness, particularly in these idyllic moments where the only sound is the twittering birds, the hum of a distant lawnmower, or the low, rumbling wind of an approaching storm. The serenity of these images and scenes languidly flow into one another, evoking the protagonists’ laconic state of being. Schmitz juxtaposes these gentle and bucolic tableaux with the more stimulating sensations of the posse’s visit to town: the thumping house music, loquacious crowds, and sharp sounds of tap dancers’ shoes on cobblestone streets. The exhilarating ebb and flow of society differs from the resting serenity of their arrangement with Wilfrid. Apart from the opening scene, the only instance of musical score is during a scene in which the group stands transfixed before a burning fire. Schmitz arranges swift close-ups of his subjects to the driving sounds of synthesizers swirling like the embers that flicker in the night sky—a quiet, reflective moment that ties together these inert and questioning souls meandering through life. Carwash takes a tense turn when an unforeseen event impels the thieves’ avarice.

At just shy of an hour long, Schmitz’s Carwash does not probe too deeply into the ragtag gang’s inner lives, occasionally losing its emotional thrust, but one becomes lost in its poetics of language, the ease with which the group quibbles or reflects on existential quandaries and the quirks of their personalities. The film flourishes in the subtle humor drawn from the characters’ tête-à-têtes. The easygoing ruggedness of the performances by Depas and Soetens engages, but it is Ameuille’s unreserved eccentricity that carries the film along. Carwash moves with a breezy fluidity as if lolling by Wilfrid’s favored lake.