First Look 2018: The Lives of Thérèse 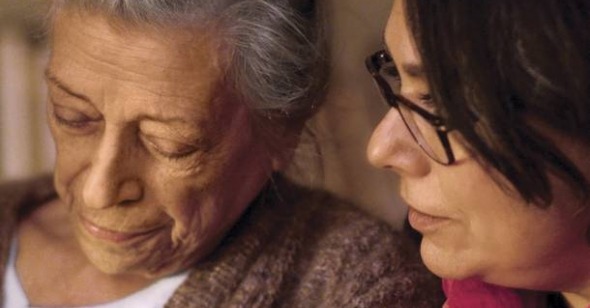 All About My Mother
Julien Allen on The Lives of Thérèse

The Lives of Thérèse plays Sunday, January 7, as part of Museum of the Moving Image’s First Look 2018.

If you’re wondering how formidable people live their final moments, then this film provides the answer: much like the rest of us. It’s no prettier, no more dignified, and it’s just as desperately upsetting for those they leave behind. But what the militant feminist campaigner Thérèse Clerc achieved by commissioning this film—about her own death—in 2016 is to reunite death with life. She felt strongly that aging and dying were too readily concealed in society and she considered that this film could “help people to die.” Thérèse had spent her life skewering taboos, and the small matter of her impending disappearance wasn’t about to stop her.

Coming off the back of his more light-hearted The Invisible Ones (which featured various superannuated homosexuals reminiscing about what they had to go through in the staunchly Catholic France of the 1950s and 1960s, when their sexuality was treated on national insurance as a mental condition), director Sébastien Lifshitz focuses on one of its subjects and expands the scope of her extraordinary story. In the 1950s, Thérèse was a downtrodden bourgeois Catholic housewife who had attracted attention in her community for being very proper, very effacée (which translates as “subdued” but whose literal meaning is “erased”). Being someone of uncommon spirituality and intelligence, she suddenly decided one day that she didn’t want to be erased. She became indoctrinated into Marxism by worker priests, a splinter initiative by the French Catholic Church (condemned and eventually suppressed by the Vatican) to put priests in the workplace so they could reconnect with the working classes. From there, she became involved in the protestant feminist movement, one of the first in France to question the concept of the “well-bred young woman,” and by the late 1960s she was fully ensconced in militant activism for women’s rights and gay rights, had divorced from her abusive husband, and had come out as a lesbian. It is worth mentioning that she also performed clandestine abortions for free in an apartment in Montreuil, which she rented for the purpose, until the legalization of abortion in 1975, for which she had militated most passionately. To some she was “Sainte Thérèse,” to many she was—rather more chillingly—“Thérèse de Montreuil.”

These stories are told mostly in cutaway narrated sequences over (quite sublime) stock footage and scored by sober, beautiful, and very bourgeois Bach and Beethoven piano concertos, with a splash of the Swingle Singers for the May ’68 manifestations (which Thérèse actually missed in real life); but also through present day testimony from her four children, reunited because of her deteriorating condition, sitting around the kitchen table, recollecting. These sequences form the core of Lifshitz’s film, and they underpin the theme encapsulated in the plural “Lives” of the title. Each of her four children considers that they had a different mother, corresponding with a different phase in her remarkable life.

Without evading her physical degradation, Lifshitz has not produced a provocative, unblinking document of death like Wang Bing’s Mrs. Fang, but rather a mélange of life and death designed to reconcile and embrace the numerous conflicts and confusions that build up within someone who has seen so many sides of life. Being a former housewife had brought her a husband who rejected her spirited approach to life, but also four clearly remarkable children: she speaks at one point about how precious it is to “give life,” a conversation Lifshitz isn’t crass enough to juxtapose directly with the tales of kitchen table abortions. A conversation with her youngest daughter about Thérèse’s decision not to participate in avant-garde artist Otto Muehl’s notorious Friedrichshof Commune—a transparent sex-cult created purely so that men could have sex with minors—ends with Thérèse concluding that because she couldn’t have coped with seeing a stranger interfering with her daughter, she had “retained a bit of bourgeoisie.” Thérèse’s physical frailty is mirrored late in the film by her mental exhaustion when debating her granddaughter, incredulous at her idol’s inextricable equation of feminism with lesbianism (for Thérèse, “you cannot be in a man’s arms while deriding his infamy”). In just 50 minutes, nooks and crannies of humanity are explored with a deftness and potency it would normally take a six-part TV series to uncover.

Meanwhile Lifshitz’s camera is like the caress to a dying loved one. He films Thérèse on the point of falling asleep, not in a grim foreshadowing of the film’s predetermined ending, but in beatific contemplation of her beauty, her listless pose, calm and fixed as if for a painter’s brush. Certain flashbacks are presented as though dreams after she closes her eyes, while she evokes one real dream (of being stuck in a narrow crevasse while spelunking) to describe the emotional impact of her marriage. But the primary emphasis of the imagery of Lives of Thérèse is on the physical, not the ethereal. The subject’s body is shown on repeated occasions: bruised, swollen, tiring and wasting away, pressed against scanners in clinics as medical machinery whirs behind her. We are never told her condition (cancer), but we see its effects in plain sight, adding the business of dying to her roll call of worldly trials. The most poetic shot in the film is of a small piece of brioche nestled in front of Thérèse as she sits alone at the breakfast table: her struggle to break the almost weightless snack is palpable; the effort she makes to chew and swallow it is agonizing.

The Lives of Thérèse depicts the end of a campaign, one that leads from the political to the personal, from conviction to compromise. This was the journey of a woman whose very homosexuality was political: feminist, but also Marxist. Her children believed that she was straight. She sacrificed her own pleasure for principles she believed in and for causes she espoused for the good of others. This film is no different. Instead of suspense (“How will they deal with the death itself?” and “When will it come?”) or tragedy, The Lives of Thérèse is a celebration of life and an epitaph to courage.