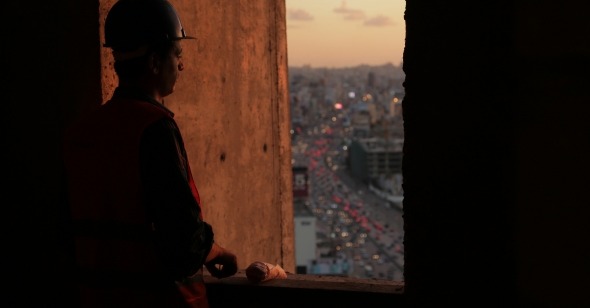 Sky and Stone
Rooney Elmi on Taste of Cement

“My father’s palm was the city of Beirut.”

It would be all too simple to relish in the formidable visual brilliance of Taste of Cement without acknowledging the metaphorical significance of this staggering portrait of Beirut from above and below. Set on the construction site of a luxury skyscraper, Cement follows a group of Syrian refugee laborers assembling the real estate behemoth while their own homes are being obliterated. In the decades following the Lebanon conflict, the Syrian civil war rages on, and in its shadow the worst humanitarian crisis of the 21st century continues. The men live in the catacombs underneath their project, their sole sources of light are spare bulbs, the illuminating glare from their cellphones, and a small television set. Their only company besides one another are the familiar faces of their native news reporters relaying up-to-date information about the state of the motherland. Berlin-based Syrian filmmaker Ziad Kalthoum has created here a study of men anguished by conflict without ever exploiting their predicament; Cement is a cinematic odyssey that invokes the senses and proves that the moving image is a singularly apt medium for representing the cost of human displacement.

The film’s title refers to a traumatic moment in our unnamed narrator’s adolescence. His father was also a construction worker in Beirut, but during a less fierce era. In between his visits, he saved enough money to build his family a home, which was later demolished in a government-sponsored air-strike. Beneath the rubble lay his son—our eyes and ears in the film—fighting for his life, with only the taste of cement as his company. Reminiscent of Chantal Akerman’s News from Home (1977), a snapshot of a city from the vantage point of an outsider, Cement is just shy of being the kind of film that could be labeled durational cinema, while at the same time demanding the undivided attention of viewers with its minimal, poetic voice-over dialogue. Our commentator lays the foundation for a poetic exploration of exile and toil while serving as a mouthpiece for a community that has been reprimanded into silence.

Opening with a spectacular drone shot, the film, lensed by Lebanese director of photography Talal Khoury, offers many images of widescreen majesty, and aesthetically pivots from the norm of traditional observation into a film that is surprisingly, radically elegiac. Images of the migrant workers are juxtaposed with images that reflect the confinement of their environment, barred behind the structures of their own making: a self-made carceral habitat. The daily routines of the men resemble those of worker ants, living just underneath the human population and uniformly making their way to ground level at sunrise for the day’s tasks. In one captivating scene, the men are shown in their Hi Vis jackets dissolving into an uneven hole in the ground that just so happens to house their living quarters. The cement itself is a signifier of destruction and creation, oscillating between two national dimensions. In the skyscrapers’ construction in Lebanon and the bombing campaigns in Syria, we are constantly reminded of the cyclical nature of this lyrical visual essay.

Utilizing the backdrop of Beirut’s bustling cityscape, the film harnesses a sense of alienation throughout its 85 minutes. From the men’s nighttime routine of swiping through photos of Aleppo and Damascus in ruins, the daily backbreaking labor, and the government-imposed 7p.m. curfew on Syrian workers, there wouldn not seem to be much hope in Kalthoum’s film. Yet, a silver lining gleams. The violence in Syria is only seen secondhand, through the unblinking eyes of the men underground replaying news broadcasts or YouTube videos, and it’s never direct. For the majority of the film, Kalthoum doesn’t situate his gaze toward the chaos in his homeland but rather on the lives of those who are continuing to survive after living through it. Cement portrays the slow deterioration of the human psyche inflicted by industry and war. The quiet nature of the film parallels the acceptance of their situation, emphasizing the uniqueness of living in between civil strife. Yet, in one unorthodox scene, we’re thrusted headfirst into the recent aftermath of an airstrike on a Syrian neighborhood to witness a ragtag team of locals risking their own lives to save others. English subtitles are notably absent, underlining that human compassion needs no translation.

In Critical Nationals: The Paradoxes of Syrian Cinema, world-renowned curator and film critic Rasha Salti explains, “Syrian cinema is the premier realm of artistic expression in contemporary Syria, where a lucid, intelligent, and subversive critique of the state has forged a site for the manufacture of meaning and image.” Such thought-provoking Syrian documentaries as Omar Amiralay’s A Flood in Baath Country (2003), Reem Ali’s Zabad (2008), and Mohammad Ali Atassi and Ziad Homsi’s Our Terrible Country (2014) are ushering in a new dawn for Salti’s "premier realm.” Syrian filmmakers are taking control of their national identity, proving their narrative and visual autonomy by recording the stories of their people. Kalthoum also follows in the footsteps of the Syrian film collective Abounaddara (which translates as “the man with glasses”), an anonymous DIY group composed of several self-taught shooters mostly in and around Damascus, who want to shift the coverage of their country away from the one-dimensional. Since its arrival during the initial phase of the uprising, Abounaddara have uploaded one video each week, spotlighting individual Syrians and how they are coping—or not coping—with their current predicament. They’ve also helped to spearhead “emergency cinema,” a conscious deployment of cinematic devices that can’t be pinned down by location, aesthetics, or form.

Modern Syrian documentary filmmaking is shaping into its own coherent visual medium, similar to the ongoing perseverance of Palestinian cinema under occupation and the radical 1990s media strategy of indigenous Mexican Zapatistas. Kalthoum’s film refuses to exploit suffering, offering instead a more humane take on an unrelenting inhumane condition, illustrating that the unidentified are not the unwanted, and the "subversive critiques of the state" that Salti suggests can exhibit groundbreaking documentary reportage. As the Levant sun beats down on the migrant workers, the Mediterranean Sea shimmers with the promise of catharsis.