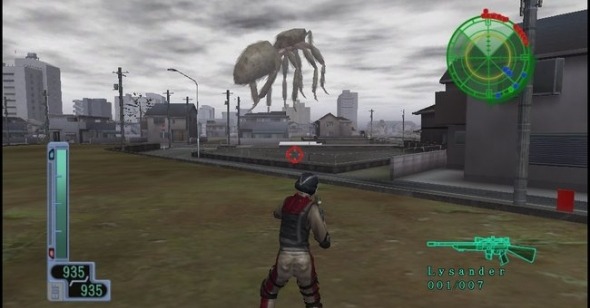 The Art of the Unreal:
Brendan Keogh on Earth Defense Force

The visual quality of a particular video game is commonly evaluated in one of two registers: graphical fidelity or style. Vast pools of money and labor are poured into producing those blockbuster video games that wish to achieve an intimate, immersive, you-are-there experience via the most “photorealistic” graphics possible; games such as Modern Warfare or Gran Turismo are celebrated for pushing their technological platforms to the limit with high-resolution textures, fluid frame-rates, and countless polygons. In other words, graphics so good that the graphics disappear. Other video games—commonly those held up as proof that video games can indeed be art—focus on visual style rather than photorealism. Games such as Braid or Limbo deliberately echo particular artistic styles and movements that speak to their broader thematic goals. Games such as Keita Takahashi’s Katamari Damacy adopt an unrealistic and cartoony style that critic David Surman has previously linked convincingly to the Superflat aesthetic of Japanese artists such as Takashi Murakami.

This is a reductive binary, of course, and many games are lauded for having visual styles that are inseparable from graphical fidelity and vice versa, such as the recently released Bloodborne with its intricate Gothic architecture and labyrinthine forests, or Robert Yang’s recent series of games that deliberately play with an uncanny valley of graphical fidelity that few other independent creators venture into.

The games left behind are those that are neither graphically nor stylistically arresting but which still use their visual aesthetic in a compelling and evocative manner. I am thinking of those games made by studios without the resources of the giant, blockbuster publishers; studios that do what they can with the resources available to provide just enough visual information with which the player can fill in the gaps. I am thinking, in particular, of a series of low-budget Japanese games that I have been spending a lot of time with recently: Sandlot’s Earth Defense Force. Originally created in 2004 as part of publisher D3’s “Simple Series” (a variety of video games made by different Japanese studios on small budgets to be sold at a discount price), Earth Defense Force games have been released on different platforms over the last decade, and the franchise has acquired something of a cult following.

Influenced largely by kaiju cinema, each EDF sees Earth invaded by different monsters: giant ants, spiders, robots, spaceships, dragons, bees, and a variety of other cliché B-grade science fiction characters. The player takes on the role of a single soldier, fighting vast swarms of bugs and robots on the streets of Tokyo. They are simple games. Trashy games, even. They are the kind of game someone might describe as “so bad it’s good”—or, just as likely, “bad.” The low budget with which the EDF games are produced is immediately visible in the bare-bones presentation: the simplistic menus and the basic fonts; the Tokyo streets full of rectangular buildings that disappear into the ground if they are shot too many times; the janky animations of the low-poly models; the inconsistent frame rate that sees animations stutter if too many creatures are on screen at one time. Taken on its own, the visual quality of the EDF games reaches neither a graphical nor stylistic fidelity.

Yet, despite this, there is something visually powerful about these games. In particular, they achieve an almost unprecedented sense of scale. From your vantage point down on the street as a single, puny human, you watch giant robots lazily step over entire skyscrapers while, at other times, the skyscrapers disappear behind throbbing masses of giant insects as a great army rushes toward you like a wave. An alien mother ship might descend out of the sky and swipe its “genocide cannon” laser across the map, wiping out a dozen city blocks and slowing the game down to a few frames per second as the PlayStation 3 struggles to render so many explosions at one time.

In the simplest terms, the sacrifice in graphical fidelity that the EDF games make (using less polygons per character model, for instance) allows them to render more models on screen at any one time, and to create vast armies that few other games can compete with. But there’s more to it than that. There’s an art to achieving a sense of enormity in video games, which is greater than simply producing a lot of models or one much larger than the playable character. It’s easy to make something big with three-dimensional graphics, but it’s hard to create a true sense of overwhelming largeness, of the self as puny in comparison to something else. This is why Fumito Ueda’s Shadow of the Colossus was so memorable. The colossi the player fought in that game were not just big; they almost felt like entire levels in and of themselves. You scampered up their sides, clawing onto an elbow or a waist as they moved across the environment. They felt like big creatures in an even bigger world.

Three aspects of EDF’s visuality in particular contribute to its grand sense of scale: environmental destruction, the flourishes on individual interactions, and, counterintuitively, the sacrifices it makes to its visual fidelity. The elements EDF chooses not to focus on are as relevant as those it does. With few exceptions, each EDF mission places the player on the streets of Tokyo, surrounded by skyscrapers and overpasses and suburbs. They are large maps, but they lack detail. Whereas the open worlds of Grand Theft Auto V or Skyrim lend a fine grain of detail to their world, EDF’s Tokyo is painted in broad strokes: a flat grid of asphalt roads surrounded by concrete skyscrapers. It feels, perhaps fittingly, like a miniature cardboard Tokyo that Godzilla might stomp through.

As you fight the giant bugs or giant robots or UFOs, your rockets and grenades and plasma cannons inevitably stray from time to time, obliterating another odd skyscraper. Or, alternatively, the giant UFO you shot out of the sky falls and demolishes a city block. The animations of the collapsing skyscrapers are nothing special: the rectangular models break into triangular pieces that then descend and conveniently fall through the bottom of the map, disappearing. There’s no real sense of the streets being covered in rubble and smoke and detritus; yet, as the battle inscribes itself on the city around you, a sense of weight and gravitas presses on your actions and those of your opponents. The conflict feels big because the world suffers from it.

If the global reactions to your actions in EDF are falling skyscrapers, then the local reactions are the visual flourishes. EDF has what some developers would say is good “game feel” (though I’m more inclined to simply say it feels good to play). As you shoot the low-detail ants and spiders and bees, clouds of green and yellow and purple blood spurt, providing instant visual feedback for each accurate attack. When one ant or spider or bee dies, they are thrown backwards, landing with a giant splat and a satisfying sound effect not dissimilar to a balloon deflating too fast. There is little I have experienced in a video game more physically satisfying than accurately lobbing a plasma cannon blast into the thick of an incoming wave of ants and watching abdomens, legs, and fluorescent blood fly in all directions as surrounding skyscrapers topple. Despite their low visual detail, these flourishes also lend the game a tangible weight, and give each of the hundreds of insects a physical presence.

Finally, it’s worth noting how EDF’s visual and technological constraints work in its favor. All video games demand the player’s imagination to seal off and make coherent their diegetic worlds. Video games don’t require a suspension of disbelief so much as a deliberate act of making believe. You see this when people who don’t commonly play video games are confused as to why they can’t open every door or go down every path, as opposed to the literate player who accepts that the game is sending them down a certain path and does the mental busywork to help this make sense. You can lean against a particular wall to recover from those four shotgun blasts to the face because, simply put, that is the reality of this video game.

EDF demands its players fill in the many visual gaps left by its low fidelity—or, rather, it asks its players to politely ignore those gaps. Its UFOs are a prime example. When the player destroys a UFO, its red lights fade and it slowly falls out of the sky and down on the city below. The entire screen shakes with the explosion, and skyscrapers topple beneath the weight of alien steel. But then the UFO doesn’t hit the ground so much as pass through it, conveniently exiting the game world now that it’s no longer needed, like an actor walking off stage. It’s amusing, cheap, and silly—but it also doesn’t matter. By the time the UFO has reached the ground, the drama of its defeat and crash have already passed.

EDF’s scale is also felt in the sense that the game is pushing itself to its technological limits. The games are often laughed at for their inconsistent frame rates, frequently slowing to a crawl due to the number of creatures onscreen. Rather than dilute the experience, I find this lag reinforces the game’s sheer, absurd scale. When the game momentarily pauses and skips a beat as I fire a missile into an oncoming swarm, it feels like reinforcement—this shot was so good that the game can barely handle it.

So-called B-grade games like EDF, which fall into neither blockbuster nor independent paradigms, have their own strategies that can’t be adequately accounted for in terms of graphical fidelity or visual style. Instead, like a film produced on a low budget, it’s a worthy artistic accomplishment in its own right. In EDF, when the mother ship wipes out a city block in unintentional slow motion, it feels like the game is pushing up against its own constraints, about to burst. Here, EDF feels grand—not because it seems like you are “really” fighting an army of giant insects, but because the video game is doing a whole lot with very little.