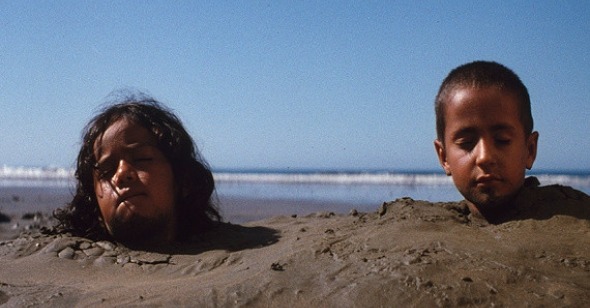 My first full day at the Stockholm International Film Festival was unusually adventurous, at least for me. I was staying at the Elite Hotel Marina Tower, a relatively new masterwork of modern Swedish design in residential Saltsjöqvarn, overlooking the fog-laden harbor, and had planned to spend the day watching films in Norrmalm, the city center. Unbeknownst to me, my hosts had arranged for a day trip through the Stockholm Business Region Development office, perhaps as a grand gesture of welcome. I’m not one for sightseeing tours, however sophisticated, but thought it would be rude to decline. So late Thursday morning, I boarded a minivan with an equally puzzled Italian journalist from Vogue, a Croatian festival director from Zagreb, and an editor at Variety, all fun, easygoing people, and it was easy to bond with them as we all had only a vague idea of where we were headed. It turned out to be worth the trip. Fifteen minutes out of town, we landed at Regissörsvillan, an elegant farmhouse restaurant at Filmstaden Solna, the historical grounds where Ingmar Bergman shot many of his movies. Joining us for lunch were Sweden’s film commissioner and Katinka Faragó, Bergman’s longtime assistant (and production manager on Fanny and Alexander), who regaled us with stories of the moody maestro. Then it was off to the scenic island district of Södermalm, Greta Garbo’s birthplace and the city’s chic artistic hub, for a VIP tour that was focused, unfortunately, on Stieg Larsson’s Millennium trilogy. Despite the fact that none of us had read the late author’s books, our guide was unfazed and disarmingly enthusiastic, proudly showing us the real-world settings for Lisbeth Salander’s adventures. Cynicism has no guard against such hospitality.

When I finally got around to seeing films later that day and into the next, I focused on arthouse fare from Latin America, the best of which was Paz Fábrega’s The Cold Water of the Sea, a small-scale seaside drama from Costa Rica positioned somewhere between Pedro González-Rubio’s Alamar and Lucretia Martel’s The Headless Woman. Fábrega relates the story of seven-year-old Karina (Montserrat Fernandez), a wise-eyed urchin vacationing at a coastal campsite with her family. In the night, she wanders off on her own, away from the beach, and falls asleep in a thicket of grass. When she’s awakened and gently questioned by Mariana (Lil Quesada Morua), a young microbiologist on a getaway with her fiancé, Rodrigo (Luis Carlos Bogantes), Karina tells her, unsettlingly, that her parents were killed in an auto accident, and that now she lives with her uncle, who “kisses me with his tongue.” Such disquieting moments are not incidental to the film, which builds a sense of unspoken, even inexpressible, malaise around these two female characters distanced by age and class, though they don’t meet again until Sea’s final half hour. Upon her return home, Karina’s free-spirited explorations are halted when she’s grounded by her mother. Similarly, Mariana’s left alone in a motel room by Rodrigo, who’s attempting to close a real-estate deal with a wealthy American. After a day or two of cloistered listlessness, she begins to experience a destabilizing melancholy. Even the arrival of close friends does not dispel her mushrooming panic, a tension evoked in the way she’s shot (overhead at a 90-degree angle as she lies in the bed, pinned like a bug; stalked from behind outdoors) but never explained.

A Tiger Award winner at the Rotterdam Film Festival, The Cold Water of the Sea epitomizes the kind of docu-fictional nativism I see increasingly in Euro-financed, postpolitical indie fare from young Latin American filmmakers like González-Rubio and Nicolás Pereda (Summer of Goliath). While certainly attuned to the psychic distress many women feel but cannot adequately express in modern society, Fábrega has an impressive talent for conveying the atmosphere of this specific place and the activities of those inhabiting it—children boring chasmic holes in the sand, women preparing meals by firelight, a gringo land developer on the hunt for a panoramic sliver of paradise. Shot on film in natural light and, most evocatively, after nightfall, when human (or in the opening scene, equine) shapes magically emerge from pools of velvety darkness, Sea is preternaturally rooted in its Pacific environment. Fábrega is alert to the littoral rhythms of marine life (such as the plashing of surf her camera periodically captures at crab’s-eye level), as well as the wild allure of the adjacent jungle, into which Mariana advances at one point, her tentative steps reflecting our own hesitant relationship to nature. (The mood she evokes is given its strongest accent in one memorable scene when countless mandarin-hued sea snakes—docile but deadly creatures—are inexplicably washed ashore, suggesting a kind of instinctive mass suicide.) More mysterious are the inner crises that afflict Mariana and prompt her to comb the beach looking for Karina, ailing herself from (a perhaps existential) sense of confinement, since even her doting father’s caresses and soft kisses stop just short of being incestuous. Watching this curiously beautiful film, which resolves uneventfully at a New Year’s celebration, I couldn’t help thinking of Pablo Neruda’s great ocean poem “The Enigmas,” in which the narrator likens himself to an angler seeking answers from the sea: “I came, like you, probing the endless stars—/And in my net, in the night, I awoke naked,/the sole catch, a fish enmeshed in the wind.”

The Argentinean drama It’s Your Fault, directed by Anahi Berneri, is a naturalistic, more character-driven variation on female anxiety, though far from traditional in its aims or its execution, scrutinizing the headspace of a stressed-out, ambiguously troubled mom over the course of a long evening. Julieta (Tetro’s Erica Rivas) is a harried, emotionally haggard young woman caring for her two children, eight-year-old Valentin (Nicasio Galan) and toddler Teo (Zenon Galan), while her estranged husband, Guillermo (Ruben Viani), is away on a business trip. It’s bedtime, but the rambunctious boys are still crashing noisily about the house, willfully oblivious to her pleas to wind things down as she tries to complete a badly needed freelance assignment. When Teo takes a bad spill from the bed, Julieta rushes him to the emergency room where an on-call pediatrician (Omar Nunez), noticing bruises on both kids, becomes circumspect. Julieta senses immediately where things are headed, but she doesn’t have the nerve to resist the head doctor’s insistence that she and the kids stay overnight for observation. For its first half hour, It’s Your Fault rattles the nerves, entombing viewers in a hellish world of loud wailing, misbehavior, and Valentin’s passive-aggressive selfishness, all of which register like routine domestic insults on Julieta’s weary face. (Even the film’s first shot, a close-up of Julieta touching a cold sore on her lip, marks the indignity of her fatigue.) She struggles to be a good mother, it is clear, but whether or not she is one is left an open question, hinging on suggestive hints dropped by Guillermo when he appears later to refute the abuse allegation the hospital files with local police. Instead, Berneri suspends Julieta (played with blunted intensity by Rivas) in a purgatory of parental despondence, a seemingly blameless victim who nevertheless internalizes all the negative signals about her fundamental worth as a mother and responsible adult. It isn’t easy to embrace this austere, often claustrophobic portrait of dejected maternity—it is neither as suspenseful nor as socially incisive as the Dardennes brothers’ L’Enfant, with which it shares some tonal and aesthetic traits—but its almost clinical realism does resonate, at its sharpest moments, with uncomfortable truths most anyone can identify with.

Politics might take a back seat to psychic turmoil in the aforementioned dramas (Half of Óscar was another), but it did play a role in at least one of the Spanish-language films I caught. The Colors of the Mountain, an airy, roomier drama by first-time writer-director Carlos César Arbeláez, offered an unsentimental child’s-eye view of a rebel-controlled mountain region in Colombia where plucky, soccer-obsessed Manuel (Hernán Mauricio Ocampo) spends his days kicking around a “drunken” (i.e. deflated) ball at loosely organized matches with his best friend, Julian (Nolberto Sánchez), and whiny albino pal Poca Luz (Genaro Aristizábal). The arrival of a new teacher brings the good-natured village kids back to their shuttered one-room elementary school (rebel graffiti spray-painted on the wall outside suggests the reason it was closed) and, for a short while, order prevails. But this close-knit community’s pastoral lifeways are increasingly disrupted by the (mostly offscreen) presence of armed guerrillas, whose violent clashes with paramilitary groups are causing panicked locals to flee. The conflict soon draws Manuel’s proud, hardworking father, Ernesto (Hernan Mendez), into the fray. Meanwhile, Manuel is desperate to recover his birthday gift—a brand new soccer ball—marooned in a pasture laden with land mines. (Locals learn of the danger when a giant black sow runs loose from a farmer and is horrifically detonated.) Arbeláez has a naturalist’s eye for the verdant vistas of Antioquia, and his gentle direction of the child actors shows an admirable patience and restraint. Yet despite sweetly expressive performances and flashes of suspense (swooping helicopters, dodgy ball-retrieval missions), Mountain felt too dramatically frail on the whole to rejuvenate or rise above the clichéd theme of innocence in peril.