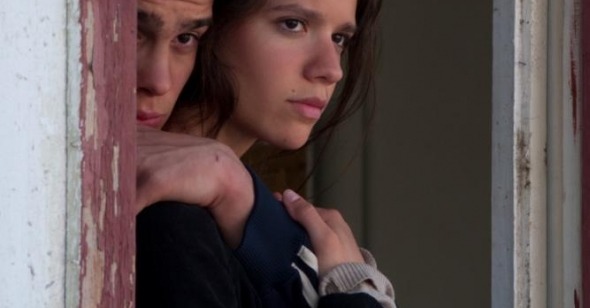 On Saturday night, I went to the 572-seat Skandia Theater on Drottninggatan, a busy pedestrian-only shopping thoroughfare in the heart of the city, for an event honoring Gus Van Sant, recipient of this year’s Stockholm Film Festival Visionary Award. The Skandia, designed in 1923 by Eric Gunnar Asplund, is Stockholm’s grandest movie palace, a neoclassical landmark that embodies European elegance and the modernist architect’s own fusion of Italo-Nordic influences (perhaps best expressed in his world-famous public library). It was the perfect setting for a tribute. After rolling an odd selection of scenes from Van Sant’s films (keyed to Elliott Smith’s Good Will Hunting track “Miss Misery”), the two-time Oscar-nominated director was brought onstage for a Q&A. He seemed tense and shy, even slightly embarrassed (Me? Really?) by all the attention. His responses to an interviewer’s queries about his beginnings in photography and film, the influence of Belá Tarr, and his use of sound design were stiff and unforthcoming, though he grew more relaxed by the time the audience had a turn to pepper him with less technical questions: What was River Phoenix like as a person and an actor? Any advice for aspiring filmmakers? Then it was time for jury president Holly Hunter and hometown hero Stellan Skarsgård to present him with the Bronze Horse, a hefty trophy that has previously gone to Wong Kar-wai, Terry Gilliam, and (last year) Luc Besson. Skarsgård slapped Van Sant in the face; Van Sant returned the favor, then explained that the gesture came from a drinking game the actor had invented late one night in a Boston bar, when they were all hammered. Skål!

My attendance at the Skandia event was not random. Earlier in the day, I had gone to see Fabrice Gobert’s Lights Out, a multiperspective high-school thriller that the program notes (and at least one professional review out of Cannes, where the film premiered in the Un Certain Regard section) claimed owed a huge debt of gratitude to Elephant. I was intrigued, not only because of the apparent connection to one of my favorite Van Sant films, but because the lenser on this French production was longtime Claire Denis collaborator Agnès Godard. The setting is a lycée campus in suburban Paris where a group of loosely connected students—moody soccer player Jérémie (Jules Pélissier), haughty redhead Alice (Ana Girardot), and gal pal Clara (Audrey Bastien) among them—all puzzle over the troubling disappearance of Simon Werner (Laurent Delbecuqe), Alice’s ex-boyfriend. Suspicion falls half-heartedly on token weirdo Jean-Baptiste Rabier (Arthur Mazet), a loner teased for refusing to shower in the locker room and caught at one point peeping into the girls’ changing room. It doesn’t help that Rabier lives in a staff dormitory on the campus with his father (Serge Riaboukine), a creepy physics instructor about whom ugly rumors are flying. Before long, another student, coquettish goth-punk Laetitia (Selma El Mouissi), also goes missing, and then a body is found in the woods. At this point, the series of events first seen from Jérémie’s perspective are recounted through the eyes of others, with crucial information added to resolve some mysteries and double-twist our understanding of what’s afoot in the private lives of these youths.

Godard’s deft Steadicam shots through the hallways of the school certainly evoke, at times, Harris Savides’ camerawork in the Van Sant film, but without the languorous long takes or observational intensity that made Elephant as much a film about technique and behavioral detail as it was an eerily calm and prolonged prelude to mass murder. Lights Out is far more active and plot-driven, a heavily scripted mystery with a Rashomon-like structure that invites specific character readings only to demolish them in subsequent segments. The film it mostly closely resembles is Rian Johnson’s Brick, minus the arch, Chandler-esque slang, though I would grade it higher than that druggy Amerindie neo-noir. Gobert’s film has a menacing, almost Lynchian air that calls to mind early episodes of Twin Peaks, but injects dissonant Sonic Youth riffs (from an original score) and naturalistic dialogue to offset the dream-world mystery vibe. Puerile talk colors the boys’ conversation at the lunch table, and the viral nature of gossip (illicit gay sex is a theme) is shown to be both endemic to group solidarity and hurtful to those whom it stings. This middle-class high school, in other words, is as sordid as any other. (The Killing Joke song “Love Like Blood,” which recurs in a party scene, is its dark anthem.) The problem with Lights Out is not the whodunit concept or its atmospheric execution—up to a point, the film’s whirlpool of adolescent melodrama kept me alert and engaged—but the too-pat way in which it resolves the central drama, reducing the complexity of these kids’ fascinatingly messy lives to a random instance of evil.

Another French film, Antony Cordier’s Happy Few, examines the conflicted friendship between two married couples who’ve opted, in an unlikely corrective to 21st-century norms, to swap partners, with all the expected emotional burdens of that arrangement. Jewelry designer Rachel (Mainra Foïs) is happily betrothed to Franck (Roschdy Zem), a New Age-y masseuse and book author who makes a play one evening for former Olympian gymnast Teri (The L Word’s Elodie Bouchez), wife of hunky Web designer Vincent (White Material’s Nicolas Duvauchelle), when they’re invited over for dinner. He’s honest about the transgression, telling his wife that he kissed Teri, and before long, the couples are engaged in a mutual experiment that tests the limits of their openness and marital commitment. Is it possible to love a longtime partner but seek sexual fulfillment in the company of another? Cordier’s ultra-bourgeois characters go the distance, gleefully sharing each other’s beds and wardrobes, and managing the expectations and emergent rules of the unorthodox erotic exchange, at least until the situation prompts reassessment. (Not before the swinging couples have had a four-way all-nude flour fight, though. Gosh, what would the kids think?) Cordier’s drama merits attention for its superlative cast and oh-so-French premise—sex and love aren’t equivalent, after all, especially given the Gallic tradition of extramarital affaires d’amour—but the twelfth-hour retreat into the traditional comforts of monogamous normativity felt disappointingly unfaithful to the film’s initial daring.

Winner of the Grand Priz and Alfred Bauer Prize at this year’s Berlinale, Florin Serban’sIf I Want to Whistle, I Whistle was a blunt entry from Romania, the kind of gritty, hard-knock carceral drama that Jacques Audiard’s A Prophet aspired to be, though it has its own issues with unevenness. Driven by George Pistereanu’s raw, nervy lead performance, Whistle introduces us to Silviu, a very tightly wound teen prisoner five days away from release. Aware that his fellow inmates will needle him cruelly in these final hours and attempt to break his date with freedom, Silviu plays it cool, allowing himself to be humiliated and taunted as a “slave” by another delinquent. But an unexpected visit from his younger brother brings troubling news: their mother (Clara Voda), who selfishly abandoned them to be with her lover years ago, has returned and wants to take the boy with her to Italy. Silviu loses it when she appears at the facility herself, and then tries to negotiate an early release with the warden (Mihai Constantin), without explaining the urgency of his request. (Pistereanu’s face is an unreadable mask of hard blinks and steely, onyx-eyed stares, suggesting coiled danger and unresolved wounds.) Although the precise reasons for his cage-rattling desperation won’t become apparent until later (we only know he’s raised his brother alone), Serban sets up another conflict—a hostage situation— by introducing Ana (Ada Condeescu), a student interning as an in-house counselor who catches Silviu’s attention.

Co-written with Catalin Mitulescu (How I Celebrated the End of the World), Serban’s film succeeds in its unromanticized depiction of Romania’s youth correctional system, the rhythms of the yard and showers captured in quasi-documentary detail by DP Marius Panduru (Police, Adjective) with the participation of actual inmates. But it’s Silviu’s story (from a play by Andreea Valean) that draws us into that world with an intensity worthy of its bottle-necked protagonist, even if it leaves behind some of its real-world authenticity and dramatic balance when it veers into hostage-crisis mode. Still, few films I’ve seen at the festival have left quite as lasting an impression.