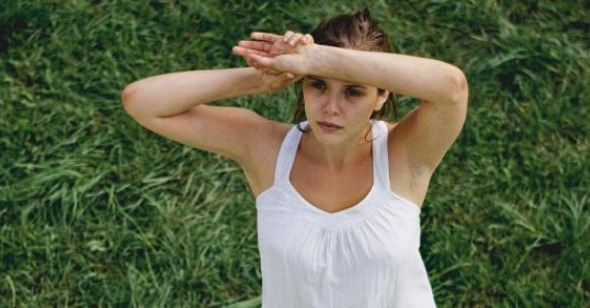 Even in Utah, the freaks come out at night. After a late-night screening at Holiday Village Cinemas on Friday, I decided to hoof it back to my condo on foot rather than wait for a shuttle bus. The temperature had dropped to about ten degrees, and within seconds I was skittering down the icy sidewalk like a two-legged beetle, trying to stay upright. Out of nowhere a wild-haired, goateed local screeched to a halt on Kearns Boulevard and asked if I wanted a ride. Actually, what he said was, “Get in! Get in!” My gut instinct as a New Yorker told me to demur and keep moving. But it was frigid. And I was in Utah. The passenger side door was frozen shut, so my new pal—who looked like a blond brother to meth-addled John Hawkes from Winter’s Bone—politely kicked it open after having what looked like a Tourette’s fit behind the wheel. “Fuck, dude,” he said, grinning madly. “NOW YOU’RE MINE. Haha. Where’s my hatchet?” He offered me some pills. Then a Heineken. “I used to work for Redford,” he boasted, launching into a rant about how they used to project films on white sheets up and down Main Street back in the day. Now he works construction, which is “sweet” because the guy who hired him likes to party. (Miming his boss: “Have you ever been brought up on drug- or alcohol-related charges? Because if you haven’t, I ain’t gonna hire you!”) A few blocks later, still talking a blue streak about his preferred mood enhancers, he pulled into the parking lot of my hotel. As I exited his battered Honda Civic, trying to not to let on how much I wanted to be on the other side of the door, he asked me for a Sundance film recommendation. I told him about Project NIM, thinking he might find common cause with a casualty of scientific experimentation.

Perhaps mountain air creates madness in some people. One of the most captivating narrative dramas in this year’s competition, Sean Durkin’s Martha Marcy May Marlene deals with notions of identity, family, class tension, and mind control, examining the post-traumatic plight of an emotionally shattered, vaguely narcotized young woman, Martha (Elizabeth Olsen), who has escaped a Manson-like farming cult in the Catskill Mountains where she was rechristened “Marcy May.” Fragile and scared, she seeks refuge at the well-appointed lakehouse owned by her estranged older sister, Lucy (Sarah Paulson), and brother-in-law, Ted (Hugh Dancy), bourgeois urbanites who know nothing of Martha’s ordeal and are spooked by her odd behavior (in one scene, she crawls into bed with them as they’re making love). As the days pass, Martha struggles to differentiate past and present—Durkin deftly handles the psychic passage from one to the other, punctuating key moments with eerily effective sound design—and how to orient herself to her new surroundings, until it becomes a question whether she can at all. A low-intensity thriller that reveals Martha’s backstory one harrowing detail at a time (Hawkes plays the scrawny cult leader who equates fear with love; all-purpose weirdo Brady Corbet is the lost girl’s icy boyfriend), Martha Marcy May Marlene is smartly written, well acted (especially by Olsen, younger sib to the famous twins) and effective in its subtle tonal shifts from personal psychodrama to Repulsion-esque nightmare.

The legacy of personal trauma also plays a crucial role in Cindy Meehl’s Country Strong–crowd-baiting Buck, an aw-shucks portrait of legendary horse trainer Buck Brannaman (a key adviser on Redford’s The Horse Whisperer), who tours the country giving clinics on “starting” colts, using a method of firm but sensitive nonverbal instruction that one rancher admiringly calls “voodoo.” Brannaman’s entire philosophy of how horses mirror the psychology and insecurities of their owners (“there are no problem horses, just horses with people problems”) stems from the merciless brutality that he and his brother experienced in childhood, at the hands of an alcoholic father, an experience that informs his entire “feel” for managing equine fear. It must be admitted: this guy’s instinctively empathic way with animals is uncanny. Meehl tracks Buck (a former child-celebrity trick roper who made numerous TV appearances after he went pro at age six) from Montana to the Carolinas as he calmly tames one unmountable wild thing after another with nothing more than a lead rope and a couple of flags, spinning stories and bracing bits of wisdom for his audiences, while matter-of-factly confiding to Meehl’s camera the gruesome facts of his youth. Oprah-ready though it may be, Buck has at least one flash of unpredictable drama, when a brain-damaged stallion lunges savagely at a seasoned cowboy and rips a 37-stitch wound into his forehead.

Speaking of Oprah, there’s no question she’ll be all over debut filmmaker Dee Rees’s gay coming-of-age drama Pariah, starring a talented cast of young black actors. Alike (Adepero Oduye) is an academically accomplished Brooklyn high-school student just beginning to feel comfortable expressing her attraction to other girls. She visits a lesbian club with her butch friend Laura (Pernell Walker) (“You need to pop that damn cherry, yo”) and buys a dildo to stuff in her jeans, hoping to attract the notice of a bicurious classmate. But Alike’s relationship with her mother, Audrey (Kim Wayans), who suspects but refuses to admit her daughter’s sexuality (“I know God doesn’t make mistakes”), is strained to the breaking point. Although the semiautobiographical story has heart and a streetwise freshness that feels unforced (Alike’s environment is urban, but resolutely middle class), the film is marred by a miscast Wayans, whose falsely pained performance as the bad mother tick tocks between comically earnest and histrionic. Other conflicts, like Laura’s yearning to find acceptance from her absent mother (what is it with demon moms?), feel stilted and extraneous—and too workshopped. None of this is likely to hurt the film’s modest commercial prospects. Nor are the clichéd identity politics and well-worn themes of youthful self-expression (Alike is a budding poet who’s drawn the interest of her AP English teacher) and finding one’s way in the world. This is the kind of film that Sundance exists to incubate and coddle. For better and worse.

A far more incendiary view of race and social politics came from Göran Hugo Olsson’s The Black Power Mixtape 1967-1975, a chronological mash-up of archival footage shot by Swedish filmmakers and broadcast journalists in the titular years—fields reports from the frontlines of the Black Power movement, interviews with key figures like Stokely Carmichael and Bobby Seale, images of historic demonstrations and appallingly violent police action—culled from newly plundered vaults. (Olsson discovered the crisp, well-preserved reels while researching a project on Philly soul music.) I’ve seen no better illustration of this too-often distorted and misunderstood movement’s beginnings and radical thrust than the material on display here, which is paired with audio commentary by Talib Kweli, Erykah Badu, Questlove, Kathleen Cleaver, Melvin Van Peebles, and others. Glimpsed at rallies, press conferences, and at home, where he interviews his mother, Carmichael is sharp, funny, and incisive in his criticisms of white oppression, articulating his respect for Dr. King, whose philosophy of nonviolence exposed the country’s demons, but claiming King made the fallacious assumption that the United States “has a conscience.” (While the pristine black-and-white footage unspools, Kweli recounts being detained by the FBI and CIA for listening privately to a 30-year-old Carmichael speech on a flight to Los Angeles.) Interviews with Eldridge Cleaver and Huey Newton elucidate the mindset and goals of the Black Panthers, one of whose legacies, we are reminded, is the free-breakfast program at most public schools. And Marxist intellectual Angela Davis, jailed on a spurious gun charge she was later acquitted of, has the film’s most heartfelt response to the issue of self-defense. When the Seventies arrive, and the positive energies of black power—so threatening to the authorities in the post ’68 period—have dispersed in an epidemic of heroin use and inner-city destabilization, Swedish cameras are there to capture the dispiriting reality. These expertly collated sociological documents are frankly too important to ignore, and we should be grateful that the Scandinavian producers who captured for posterity this history better than our own media made America’s internal matters a priority.