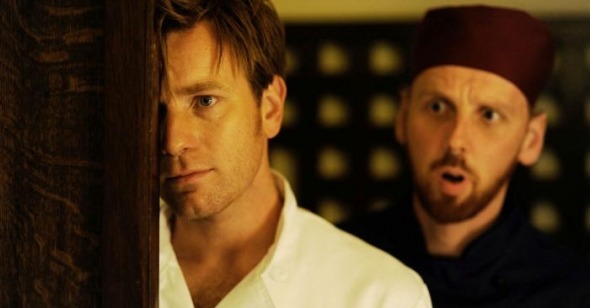 For any dedicated cinephile, there’s a certain comfort in the daily routine at Sundance: wake, drink coffee, queue up half an hour before the first day’s screening, absorb film, queue again, repeat until exhausted. (Twelve hours is my personal limit.) Sitting in a darkened theater all day long, it’s easy to feel you’re existing in a bubble, as the rest of the world falls away like molted skin. Yes, the place is ablaze with the LED glow of various mobile devices as people compulsively check email and try to maintain a haiku-like thread of electronic contact with coworkers and loved ones. But the theater is also a refuge from normal obligations, where the chatter concerns films seen, and little else. People exchange heated opinions, discuss the latest acquisitions, and share recommendations. Here in Park City, as far as I can tell, few people are trying to wrap their heads around the protests in Egypt or Obama’s State of the Union speech, even if they’ve glimpsed the day’s headlines on a news feed. The world could be ending and no one would notic

Incidentally, end-of-the-world scenarios are a favorite subject of American movies—the escapist conceit par excellence—and (as Susan Sontag first noted in her 1965 essay “The Imagination of Disaster”) are designed to vent and allay contemporary anxieties. Several films at Sundance this year tackle this conundrum—how to end the world and what that eventuality should tell us about ourselves—in tonally and ideologically divergent ways. Poised somewhere between Blindness and Children of Men is David Mackenzie’s Perfect Sense, a blithely apocalyptic film about the value of love and intimacy über alles with neither the literary pedigree of the former nor the technical bravura of the latter, its end-times premise hinging on the contagious outbreak of a sense-ravaging disease. Susan (The Dreamers’ luscious Eva Green) is an epidemiologist stung by a recent breakup and cynical about her future prospects. When an inexplicable illness seizes Glasgow’s truck drivers (uh...what?) and then the global populace (the afflicted experience profound, inconsolable grief, followed by the permanent loss of smell), she is brought into the orbit of Michael (Ewan McGregor), a chef with a love-’em-and-leave-’em reputation.

Over time, new symptoms of the disease (given the blatantly convenient acronym S.O.S.) ravage the world, stealing taste (after pangs of hunger have people gobbling lipstick, flowers, leather, and anything else in reach). Meanwhile, the cynics have fallen madly in love, and in the film’s oft-repeated mantra, delivered in voiceover, “life goes on”: Michael’s restaurant continues to function after a brief period of inactivity as people (and food critics!) rediscover the post-olfactory pleasures of temperature and texture, as well as the bourgeois privilege of being waited on. When hearing eventually goes, too, the city falls prey to panic, riots, and general mayhem. The problem with this film does not rest with McGregor or Green, whose heated performances underscore their commitment to the material, nor with Mackenzie (Young Adam), despite his unfortunate choice to cross-cut staged sequences from India, Africa, and Latin America at transitional moments, a blunder that only distances us from the actual circumstances and problems facing people in these locales (the film’s crassest sequence depicts Third World binge eaters hoovering up grain and tearing away at raw animal carcasses). The stink emanates from the fraudulent screenplay by Kim Fupz Aakeson (A Somewhat Gentle Man), whose blunt metaphors and facile, quasi-profound humanism overdetermine the outcome of this charmless exercise in eroticized agape. Perfect Sense is perfect nonsense, but will likely find an audience with those who crushed out on Crash.

A far better film, and far more devastating in its emotional portrait of a hard-hat dad succumbing to nightmarish flashes of paranoid schizophrenia (maybe), Jeff Nichols’s Take Shelterreconfigures contemporary American anxieties about terror, disease, climate change, and economic insecurity as harbingers of apocalypse in a small central Ohio town. Curtis LaForche (Michael Shannon) is a low-key mining-crew supervisor with a pretty young wife, Samantha (Jessica Chastain), and a sweet, six-year-old deaf daughter, Hannah (Tovah Stewart), whose special needs are a constant financial pressure on the close-knit family. Lately, Curtis has been afflicted by terrifying visions of a coming storm, one that violates the laws of nature and brings intruders to his doorstep. Alert to the irrationality of his fears (he visits a counselor) but reluctant to confide the severity of his dark dreams and spooky hallucinations to Samantha or his co-worker Dewart (Shea Wigham), he becomes obsessed with building out the shelter in his backyard, his erratic actions gradually alienating his wife, friends, and community.

Nichols (Shotgun Stories) is an accomplished young director with the guts and confidence to pull off a psychological thriller that, despite its sci-fi trappings, speaks more to the real-world disturbances and tensions that we so often feel as mere background anxiety. Curtis represses the phenomenal signs of those instabilities (freak storms, the debt crisis, domestic terror) like the rest of us, until they begin to spill out in unpredictably frightening ways. Shannon, one of the finest brooders in independent film, conveys it all with riveting intensity, as well as an underdog soulfulness that utterly wins a viewer’s sympathy when the time of reckoning comes for Curtis. For his part, assisted by DP Adam Stone’s impeccable sense of restraint, Nichols masterfully handles atmosphere and pace, keeping in suspension whether his everyman’s catastrophic fantasies and perceptual delusions (looking into the bright blue sky, Curtis sees a column of black birds twist into a pulsating double helix) augur the arrival of actual doom or are symptoms of incipient madness (his mother, whom he visits once a month in an assisted-living facility, has schizophrenia). Take Shelter should only solidify Shannon’s credentials as an actor’s actor (think Christopher Walken, circa The Anderson Tapes) and vault Nichols into the higher echelon of indie writer-directors with a firm grasp of cinematic technique—and a brain.

Last but not least is Gregg Araki’s fun, frivolous teen-apocalypse flick Kaboom, about an omnisexual (but gay-coded) Southern California college student, Smith (Thomas Dekker), who becomes embroiled in a mysterious conspiracy that involves premonitory dreams, gruesome killings, black magic, hallucinogens, a millenarian cult, and, as ever in Araki’s universe, tons of great sex. One running joke involves Smith’s hunky, dumb, frustratingly straight surfer roommate, Thor (Chris Zylka); another concerns the psychotically jealous witch that Smith’s best friend Stella (Haley Bennett) has the hots for. The film’s liveliest performance comes from up-and-comer Juno Temple (daughter of Julien), whose London (yes, the characters all have absurd names) is an infectious bubble of lusty charisma and smart sense. It’s pointless to rehearse the sci-fi and fantasy-inflected plot points—better to see it yourself—or to say much about what Araki is up to here. Obviously, he just wants to have fun with his pretty young things before hitting the fuck-it-all button and incinerating Planet Earth. It’s all pretty ridiculous—and kind of awesome.