Unlike the terms fantasy or even magical realism, escapism suggests something not only false but fabricated, a deliberate refusal of life as it is. For the majority of Hollywood films, that means tying up disappointments and messy circumstances into a tidy, morally uplifting three-act-structure. But escapism is also encumbered by its own impossibility. It is the imagination of the prisoner who can’t flee, and it’s what we all do, to some extent, when we duck into a movie theater or switch on our DVD players for a couple of hours, temporarily leaving our lives to be absorbed into another’s.

In this way, it’s not surprising that Bernardo Bertolucci’s 1979 La Luna and Sofia Coppola’s 2003 Lost in Translation, two films that venture abroad to enact their escapist fantasies, contain scenes of movie watching. On the steamy summer streets of La Luna’s Rome, fifteen-year old Joe (Matthew Barry) pulls his new Italian love interest Arianna (Elisabetta Campeti) into a theater showing a dubbed version of the 1953 melodrama Niagara. While the teenagers spend most of their time groping each other in the men’s room, we catch a glimpse of the scene where Marilyn Monroe, as a fuchsia-clad Rose Loomis, saunters into a party and pretty much stops everything with her siren song. Niagara descends from there, and it’s a long way down the falls; in this brightly colored noir, the destination for honeymooners and scheming lovers isn’t the scenic view from the top, but the wreckage below. With Lost, the past-his-prime actor Bob (Bill Murray) and wayward young Charlotte (Scarlett Johanssen) drink sake and watch La Dolce vita in Bob’s room at the Park Hyatt Tokyo. On the TV we see Marcello (Marcello Mastroianni) and Sylvia (Anita Ekberg) giddily wandering Rome’s early morning alleyways, discovering a tiny mewing kitten along the way. Like Marcello and Sylvia, Bob and Charlotte are strangers to each other and the city they find themselves in, momentarily coming together in the dim hours when the rest of the world slips away.

Both films chart other routes of escape, to be sure. Lost is all but soaked in Suntory whiskey, with occasional detours to pachinko parlors, Shinto temples, and ikebana classes bundled in a cool, postmillennial orientalism. La Luna has drugs, Verdi, and jewel-toned caftans, and the entire film is infused with an overripe decadence typical of New Hollywood’s waning years in the late seventies. Stylistically, it may seem strange that Coppola’s muted depiction of jet-set ennui is the indie pick, while La Luna, a flamboyant feature even by Bertolucci standards, was released by a major studio (Twentieth Century Fox).

Coppola has said that “independent” in her films is a matter of financing, though like her father she always writes her own scripts. Lost and, more recently, Somewhere are modeled on her life of exceptional privilege, and while Lost especially has been critiqued for its lack of critique, the soft touches and intimate spaces of her films are undoubtedly appealing, or at least pretty to look at. In Lost we see Charlotte idling around her room in delicate sheer panties, hugging her knees at the windowsill, or hanging up pink origami mobiles. Sleepless and jetlagged, she and Bob drift to the hotel bar, and over the course of several lonely days begin to form an ambiguous rapport. Their relationship is playful and chaste, and their most intimate encounter, as many critics have noted, is the gentle hand he places on her bare foot as both of them fall, finally, asleep.

La Luna, meanwhile, was Bertolucci’s third American studio film (and his last for many years). While it opened the 17th New York Film Festival, it was banned in Toronto and elsewhere for its sexual content. Critics, meanwhile, dismissed it for its histrionics, which, as Vincent Canby charged, Europeans lauded as “intellectualized romanticism” but which American audiences dismissed as “bunkum.” In an interview with Cineaste, Bertolucci retorted, “The problem is that you’re very puritanical in this country. I can’t think of a single American film in which sex is important as communication, as language.” Despite La Luna’s status as an Italian-American coproduction, Fox’s involvement did little to hinder Bertolucci’s excesses in a film that was perceived as being too sexual, too intellectual, too operatic, too psychoanalytic, too… European. However much Hollywood had recently sought out New Wave stylistics, the film’s overwrought Oedipal imagery—complete with a mirror, a tangled ball of yarn linking mother to infant son, and a primal scene danced to the Twist—was apparently not the kind of escape the studios were looking for. In the film, faded opera diva Caterina (Jill Clayburgh) travels with her son Joe from Brooklyn Heights to Rome to revitalize her career following the death of her husband. The listless Joe develops a heroin habit and in a desperate attempt to save her son, Caterina gives up singing and begins an incestuous affair with him. She takes him to Parma where he learns of and meets his birth father, and at the ancient ruins of the Baths of Caracalla, under a swollen moon, the family reunites to the sound of Caterina’s triumphant return to the stage.

La Luna gives little sense of its host country beyond its crumbling ruins and sweeping arias, and it portrays Italy as the birthplace of the culture that Caterina and, arguably Bertolucci himself, aspire to return to. Japan is a bit more problematic in Lost, a place that’s only understood as foreign, or even possibly alien, as Bob, in town to shoot a series of ads, grimaces through stiff bows with his Japanese handlers and fumbles with just about every piece of furniture in his hotel room. Coppola was roundly criticized for the film’s distorted racial caricatures, and the fact that the only characters given psychological depth happen to be white is dismaying to say the least. Yet in keeping with Bob and Charlotte’s shared sense of isolation, Coppola structures the entire film so that the world they encounter reflects their resistance to it. In Lost, the neon-drenched Tokyo, awash in Kevin Shields’s fuzzy guitar drone, is a made-up place like La Luna’s Rome and Parma, distant settings for relationships that can’t exist at home.

Both Bertolucci and Coppola excel at creating feverish, interior worlds that deny the shifting realities around them. These spaces can be as grandiose as the decaying Forbidden City in The Last Emperor and the Palace of Versailles on the eve of revolution in Marie Antoinette, or as unassuming as the bare mattress of Last Tango in Paris and the curfew-sealed house of The Virgin Suicides. Though we may perceive the limits of these places and the imminent threats that besiege them, Bertolucci and Coppola’s characters do not. As Caterina exclaims to Joe at the gates of Villa Verdi, “He saw everything! He saw the world in this little house.” La Luna and Lost, meanwhile, shape their secluded spaces not by hunkering down but through flight, arriving in territories that are unfamiliar, strange, and sometimes hostile. In both cases, travel is a way of inviting what’s foreign, to transgress moral boundaries as geographic ones are crossed. And even then, the lure of escape still beckons, as when Bob half-jokingly plots a prison break with Charlotte: “We have to first get out of this bar, then the hotel, then the city, and then the country. Are you in or are you out?”

In Lost and La Luna, escape means drawing quietly inward, slipping a message under a door or stealing a kiss at a railroad crossing, to allow the bonds between characters to grow unhampered. Caterina and Joe’s passionate embraces at first seem to shock them, but their erotic relationship never eclipses the familial one. From the prologue’s graceful image of Caterina kissing a spot of honey dripped on a baby Joe’s arm to the intense clawing and fighting the two later inflict on each other, the intimacy of their sensual encounters is not so different from the intense closeness they’ve always shared. Bertolucci called the film a “mielodrama,” playing on the Italian word for honey; a sticky sweetness, however treacly, that firmly binds the pair together. Born on Bertolucci’s analyst’s couch, La Luna presents Oedipus without the tragedy, momma’s boy nursed into momma’s man.

Lost’s incestuous intimations are less overtly illicit, though Bob and Charlotte’s father-daughter kinship shadows and even strengthens their muted romance. Charlotte frequently reminds Bob about his age, whether she’s asking his advice on marriage and adulthood or teasing him about a midlife crisis, and it’s telling that when Charlotte catches Bob after he slept with a mildly terrifying lounge singer, she says coldly, “Well, she is closer to your age.” If in La Luna, sex is, as Bertolucci described, a form of communication, a means of pushing ordinary relationships to unnamable places, then with Lost the equation is reversed. For Bob and Charlotte, language becomes a form of sex, an intimate encounter not otherwise possible.

This may be why karaoke is so crucial to the film. As they sing in a zebra-printed booth, they turn familiar songs inside out, singing through and against the lyrics so that they can speak to each other. Bob takes on Elvis Costello’s “(What’s So Funny ‘Bout) Peace, Love and Understanding,” his voice cracking as he belts, “As I walk through this wicked world, searchin’ for light in the darkness of insanity. I ask myself, is all hope lost?” Wearing a pink wig, Charlotte responds with a lilting rendition of “Brass in My Pocket” by The Pretenders: “’Cause I gonna make you see, there’s nobody else here, no one like me…” With his final song choice, Roxy Music’s “More than This,” Bob solemnly agrees. Looking over to Charlotte, he sings, “More than this, you know there’s nothing.” You could hardly call it singing: his voice is barely more than a mutter, stripped of his earlier hamminess, or any sense of performance. For a moment, he’s just talking to her. His jokes soon return, of course, and Charlotte dutifully giggles, but in this little room, they’re speaking their language, saying the things that can’t be said, not until their tender farewell, anyway. And even then, to the great frustration of IMDB users ever since, Coppola doesn’t allow us to hear what Bob whispers into Charlotte’s ear. In that final scene, they stand in the middle of a busy Shinjuku street, unnoticed and unheard by everyone around them. Their secret is theirs alone, and they embrace with their private world, their private words, closed tightly around them.

Music, of course, is central to La Luna: when Joe gazes as his mother dressed as Lenora on opening night of Il Trovatore, we see her as he does, a celestial creature floating against a night sky. And in the concluding scene, Caterina’s restored voice draws together the father and son that had previously been separated. Yet it was also Caterina’s voice, and her ambition, that drove everyone apart, tearing at her family’s seams even before she decided to stop singing. Music here is jarring, delirious, the source of fantasy as well as trauma, and it’s not just Verdi, either. In one scene, Joe stumbles into a café high, eats an ice cream cone, and dances wildly to the Bee Gees’s “Night Fever.” An older man watches him and then embraces him. Joe stops. “I’m looking for someone,” he says, almost in protest. It’s not too difficult to imagine who he means. Before the music ever began, before there were even words, there was the honeyed voice of his mother, a sound which bound them together forever, a gentle murmuring which promised the moon. 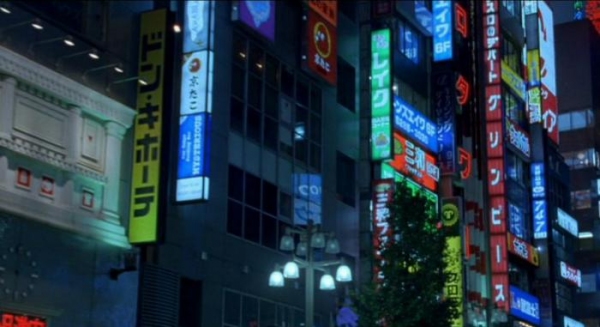