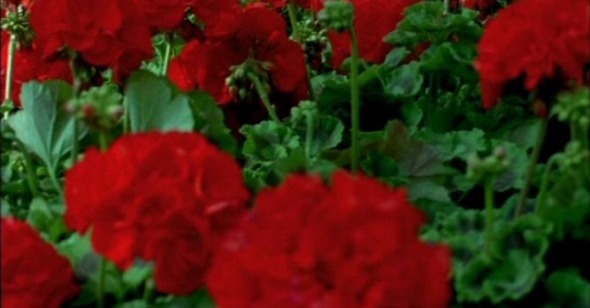 A few months back, I had a conversation with a Reverse Shot contributor on the subject of Jean-Luc Godard and our shared reticence to write about his work. Both of us admitted to resisting opportunities to comment in print on his films, not because we were unfamiliar with the work, but because we felt ill-equipped to do so. I’ve found that even among those who’ve considered the man’s oeuvre in entirety, the sentiment is not uncommon; the scholar is often quickest to deride any clear-cut critical opinion and least likely to offer his own. It’s funny that in my experience Godard remains inspiration for the hottest critical discussions post-screening or over dinner when many writers renege when asked to comment on his films in a thousand words or less—especially considering that Jean-Luc the young Cahiers du cinéma scribe made a name for himself in the fifties with bold and sometimes radical considerations of incredibly complex work. This is not to say that he doesn’t receive his share of attention, but only to claim that between proclamations of his genius and the now commonplace dismissal of his later work, there remains a chasm of enlightening considerations. How is it that so many of today’s critics, glad to raze deserving reputations and devote unending attention to the specious Tarantino genius, see Godard as slightly out of reach?

One of the reasons may be in large part due to the fact that his body of work has continually evolved and mutated in unprecedented aberration. The work for which he is most famed—that completed during French New Wave of the Sixties—gave way in the years that followed to films which stretch the expanse of the medium in both content and style. His artistic courage soon pierced the avant-garde where the plight of accessibility became a focal point for fans, and by the Eighties and films like his adaptation of King Lear (1987), many had basically given up on the man. In truth, some of this later work is so marked by esoteric jaunts and inscrutable hyper-cinematic formulas that one gets the sense intellectual fatigue has had about as much to do with the loss of admirers as anything else.

And though it’s true that prior to the millennium, excitement surrounding Godard’s films steadily waned, at press conferences and in the rare interview, the aging auteur has invariably made waves with redoubtable and often ribald opinions, most recently demonstrated in his castration of the critically beloved Michael Moore at Cannes 2004. “Moore doesn't distinguish between text and image," Godard argued, "He doesn't know what he's doing.” The ultimate effect of this artistic and personal split from the intellectual mainstream is that the quintessential French auteur’s influence has essentially fallen by the wayside and the unfortunate repercussions can not be overstated; with once-great auteurs either in retirement or directing The Dreamers, we are in dire need of sound-minded masters.

In 2001, just when it seemed too late, Godard gave us In Praise of Love, a shocking return to (comprehensible) form which put him back on the festival circuit and on the forefront of everyone’s mind. In Praise teemed with off-putting Godardian hyperbole but found an audience nonetheless, providing an ideal stepping stone back to the top spot he once commanded and may have begun to regain with this year’s remarkable Notre musique. The triptych, which begins in the dregs of Hell and climbs an artisan’s ladder to Heaven, seemed not only a divine cinematic hymn sung from above but most importantly, an inspired missal for all of us youthful filmmakers and film lovers who still believe the medium of cinema possesses both profound gravity and the power to change the world (this may seem a grand endeavor, but if Notre musique is anything at all, it’s unabashedly ambitious).

“Hell,” an onslaught of collaged clips culled from recognizable cinema, newsreel, and stock footage, depicts successive acts of war in an unforgettable jeremiad for and about the human race. A piano pounds out discordant marches as individual second-long stories quickly blend into a singular visual wail. On Godard’s terms, Hell is simple and infinite, a pounding drum of death that echoes itself until building into an indistinguishable mass of destruction with allusion to the depreciation of our race into animalistic proclivity.

The by-product, a war-torn modern-day Sarajevo, is where Godard situates “Purgatory” (“The Second Kingdom”) and we find the man himself sitting at an airport on his way to a conference in which he is to lecture appropriately (listen up, Michael Moore) on the subject of “le text et l’image.” Judith and Olga, a pair of young women both connected in their heritage to war, become co-protagonists in this, the longest portion of the film. A journalist and student respectively, the latter is among the small crowd of youths staring up at the grumbling auteur as he elucidates the inability of Howard Hawks to formally relay the difference between the sexes in a shot/reverse shot sequence, and begins to evince the essence of a recurring Notre musique motif: the relationship between history and the way in which it is recorded. Not surprisingly, the lecture is steeped in many themes which concern the film itself, and Godard’s lesson resonates through Notre musique’s fragmented narratives from end to end. As an aside, this short segment may offer more to the study of Godard’s later work than any bevy of critical interpretation.

While Olga is there to attend the conference, Judith’s mission is more difficult to grasp—she wanders the ruins of the city and maintains a sense of hope in political resolution in her homeland that those she interviews are utterly without. Indeed, there are few hopeful adults inhabiting this faded anathema and the pair of young women constantly battle the undertow of concession that characterizes the city. In the facades of run-down buildings and the cattle-like movement of market-goers, Godard illumines the sense of defeat and disillusionment here. Dappling the stasis with bouts of stunted philosophical musing, Notre musique’s older characters spend most of their time drinking and smoking and spouting despondent table talk like “we always discuss the key to the problem, never the lock.”

Notre musique might seem merely another playground for this kind of dead-end philosophy were it not for an offering of youth as its radical antagonist and progress’s most vital lifeline; though many have commented that one of the films funniest moments occurs when a student asks Godard if “the little digital cameras will save cinema”—what amounts to a cinematic sigh follows—Olga goes on to make a film with one of those cameras and finally commits an actual act of political rebellion when not long after the conference, she asks a theater full of moviegoers in Jerusalem if one Israeli in the crowd will die with her for peace. The act takes on particular power considering an early scene in the film in which she asks why peaceful people don’t start revolutions. “They start libraries,” Godard answers with devastating lassitude.

But it is the young people that are the only inhabitants of Godard’s edenic “Heaven.” In a short segment which closes the film, Olga—who ends up there as a result of her political stunt—walks amidst a forest of lustrous foliage that stands in stark contrast to Sarajevo’s concrete confines, past a young man reading, a few youths playing and laughing, before she shares an apple near the water. Godard’s disinterest in conventional narrative strategy piques in this final segment which features a tracking shot sure to be added to the list of his greatest. Heaven most resembles a peaceful commune in which the simple act of someone offering another a seat or a bite of their food becomes profound rebuttal to the selfish apathy of the film’s cynic-ruled midsection, and in its formal properties alone, is appropriately antithetical to “Hell.” That is, until one recognizes that even its borders are guarded by gun-toting military. Heaven is not pure, it’s protected.

Godard has never shied away from making movies about movies and his own rigorous pursuit of transcendent cinema in the face of corrupted politics and societal artistic malaise. And like his 1963 masterpiece Contempt, Notre musiques rigorous examination of cinema as fallible super-medium builds subtly into a powerful wave of hope, even despite itself. What makes this treatment doubly remarkable, however, is the implicit sense that Godard is handing over the reigns to a younger generation. Where his previous work held up a mirror to his own struggles, there is in Notre musique a filmmaker that has stepped out of that professional ambivalence into the role of master teacher—a moniker most obviously sallied by the lecture scenes, but confirmed in Godard’s positioning of himself in the narrative: having a drink with friends, chatting to a traveler alone, and most remarkably, tending to his flower garden at home when he gets the news that young Olga has attempted her act of revolution. The students are the ones making bold moves and movies in Notre musique, and who better than Godard to offer his wisdom to the next generation in search of the political in cinema, the cinema of politics, and the beauty of film that is for filmmaker and film-lovers alike, “our music.”

There is little to say in the face of Notre musique but that Jean-Luc Godard was never lost and has a lot more to teach us about the medium we love. Perhaps that is why we find his work so fascinating to debate and so impossible to elucidate in a few insubstantial paragraphs. And in the end, that may be the beauty of writing about the master filmmaker. In its impossible scope, the work of Jean-Luc Godard is a constant reminder of cinema as everything it can be: simultaneously acute and transcendent, a medium spanning mediums, the essence of which—like Godard’s ouevre itself—will forever remain just slightly beyond our grasp.