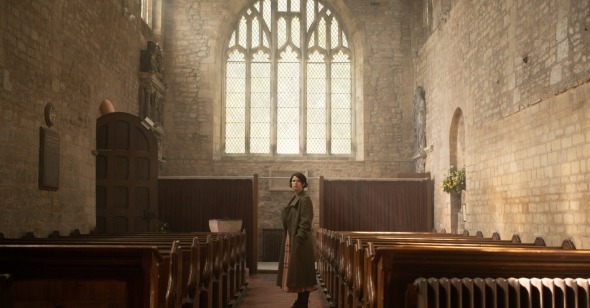 Look What You Made Me Do
By Matthew Eng

“Have you met men?” This question—cuttingly posed by writer Jamilah Lemieux in response to a 2016 Atlantic tweet asking, “Why does Rihanna keep murdering men in music videos?”—entered my head multiple times while watching Alex Garland’s Men. This is the British writer-director’s follow-up to the ungainly, agonized sci-fi drama Annihilation (2018), his first toe-dip into studio filmmaking, a box-office bomb that drew defenders and detractors roughly equal in their ardency. Garland’s third film bears a simple-enough premise: after the tragic death of her husband James (Paapa Essiedu), a young widow (Jessie Buckley) rents a home in the English countryside for a two-week sojourn, only to be plagued by the surrounding village’s various male inhabitants (all of whom are played by the actor Rory Kinnear) with increasingly vicious results.

We are first introduced to Buckley’s Harper Marlowe in a hushed, protracted opening shot as she stands stock-still in her kitchen, dried blood under her nostrils, a clichéd moment of calm before the storm. Harper snaps to attention when she catches sight of James falling to his death from their London high-rise, an event that Garland and editor Jake Roberts will return us to time and again, the turgid tragedy that signals the disintegration of Harper’s emotional universe. From there, we are carted to the present, where Harper is driving to the centuries-old country house, the blissed-out, Laurel Canyon–evoking strains of Elton John’s deep-cut cover of Lesley Duncan’s “Love Song” layered over the montage. Once she’s arrived at the cozy, wood-paneled exemplar of English regency porn, Harper endures an awkward, prolonged tour from the estate’s owner, Geoffrey, played by Kinnear with protruding dentures, floppy wig, and the unmistakable air of straight, white, male ineptness.

When his heroine leaves the grounds to tour the nearby forest, Garland produces his film’s only sufficiently chilling sequence: as Harper harmonizes with her echoes in a cavernous tunnel, a vague figure emerges at the other end and begins to chase her through the woods, ultimately revealing himself to be a scabby, stark-naked man (Kinnear, again). Things worsen from there. Harper, who is hounded by a sense of guilt over her husband’s death, receives scant protection or pity from a policeman, a vicar, a bartender, and a schoolboy, the latter character achieved by jarringly and not altogether convincingly superimposing Kinnear’s face on the body of child actor Zak Rothera-Oxley.

Garland’s slender directorial output has proven a useful case study in the importance of casting. The dead weight of Domhnall Gleeson in Ex Machina (2015) was more than compensated by the erotic thrall of Oscar Isaac’s bearded, bare-chested alpha-male inventor and the sinuous delicacy of Alicia Vikander’s vocal inflections and microexpressions. Conversely, Annihilation creaks and finally crumbles under the strain of five mismatched, under-directed actresses who look to be acting in at least three different movies. Garland could have hardly chosen a more appealing center for Men than Buckley, whose knack for carrying her characters to emotional extremes is seldom matched in contemporary drama. In films like Beast (2017), I’m Thinking of Ending Things (2020), and The Lost Daughter (2021), or even in a seemingly straightforward underdog tale like Wild Rose (2018), Buckley’s trademark abrasiveness perforates her characters’ surfaces, revealing fervors and frustrations so raw and forthright that her performances can repel at first gaze, only to worm their way back into the viewer’s mind with a vivid persistence. Buckley doesn’t merely inhabit her characters; she gets their blood burning.

Unfortunately, Garland asks little more of Buckley than frozen, emblematic expressions of fear, wonderment, and fury. Buckley puts up a fighting effort, but Harper operates like one of Darren Aronofsky’s female protagonists, like Ellen Burstyn in Requiem for a Dream (2000), Natalie Portman in Black Swan (2010), or Jennifer Lawrence in mother! (2017), she is a purely reactive prisoner to forces beyond her will. Of course, great horror has never necessitated characters of depth or agency. But little of the horror that occurs around Harper—in either the past or the present—proves particularly alarming or enthralling.

Perhaps this is because so much of Garland’s screenplay is concerned with the flashy presence of big, topical themes like Trauma, Abuse, and Toxic Masculinity. Garland is intrigued by these themes as talking points, but he is incapable of incorporating them into the lived realities of his characters in ways that feel organically rooted in real-world concerns. He is oblivious as to how the key casting of the film’s lone Black actor might be treated with more sensitivity or empathy. Take the volatile marriage between Harper and James, played by the deplorably wasted Essiedu, whose unforgettable performance as Michaela Coel’s devastated yet devoted bestie Kwame on I May Destroy You should have instantly made him a star. Glimpsed mainly in the fight that triggered his character’s death (a likely though unconfirmed suicide), Essiedu is thoughtlessly tasked with foaming at the mouth for most of his screen time as the raging, paranoiac, history-less Black husband of a white woman, a character defined by one rash, brutal act of violence and his demise. That Garland’s camera lingers and leers at Essiedu’s bloodied, mangled body post-fall—all for the sake of setting up a subsequent visual parallel that calls attention only to the director’s self-assumed cleverness—is in remarkably bad taste.

In the countryside where the main action occurs, Men keeps shapeshifting in ways that allude to Garland’s superior forbears. The film’s final act traps Harper in a home-invasion thriller à la Black Christmas; its climax is a lurid, lengthy attempt at some Cronenbergian body horror. Garland and editor Roberts ape the associative cuts of Nicolas Roeg to bring Harper’s narrative full circle, but what exists inside that circle is a blur of half-formed statements and aggressive visual conceits made stale through relentless repetition. Garland falters as a dramatist throughout Men, devising numerous scenes that pivot on Buckley racing to lock a door. But he also betrays a limited visual sensibility in his third collaboration with the cinematographer Rob Hardy. The natural world, whether typified by trembling leaves and cornflower-blue flowers in the early passages or the murky visuals of its night scenes, is never more than handsomely shot b-roll, rather than a tangible place that rivets and enfolds his characters. (The film was shot on location in the English county of Gloucestershire.)

In press notes, Garland has insisted that Men “leans very hard into the idea that a story is a 50-50 split between the storytellers and the story receivers.” But there is a vast difference between a filmmaker who purposefully (and pleasurably) withholds from “story receivers” and one who flings a mess of concepts and signifiers at the screen and invites an audience to make any meaning they see fit. We are hardly in the land of Lynch when Harper bites into a forbidden fruit from Geoffrey’s apple tree nor later when this tree sheds all its crops in portentous slo-mo. In this moment, the flimsy evocation of a gendered Biblical symbol is a dead end; it is the veneer of a feminist agenda whose nuances are nonexistent.

The anguish and ire that flood Buckley’s face, the wilds of grief that this nervy actress appears ready to wade through, are siphoned off into lunkheaded metaphors that fail to illuminate her character’s mindset. Even the ostentatious casting gambit centered around Kinnear, a self-effacing actor skilled at playing diffident and bombastic men alike, suffers from Garland’s inability to say much of anything about his chosen themes. If Men is a film about the evil men wage, then is Kinnear’s presence an overblown #YesAllMen co-sign? Is the apple tree simply here to remind us that men have been blaming women for all of humanity’s ills since the beginning of time? Is the film’s “jaw-dropping, brain-melting” ending meant to signify that wicked men beget wicked men? Is (spoiler) James’s surprise appearance in Garland’s gory finale the exclamation mark on the statement “All men are trash!”? Maybe not, maybe so. Maybe what feels hilariously true in a single tweet isn’t enough to sustain a feature-length film. Maybe too many of today’s filmmakers are so concerned with keeping their fingers on the pulse of the zeitgeist that they’re draining the blood from their films. Too busy reaffirming what sounds right, they avoid danger at all costs, straining to create provocative art from a place of complacency. Garland intends to shock us here, but he lacks the courage of his assumed convictions to effectively do so. In Men, he clears his throat to emit hot air.