In this column, one writer sends another a new piece of writing about a film they have been watching and pondering over, in the hopes that this will prompt a connectionŌĆöemotional, thematic, historical, or analyticalŌĆöto a different film the other has been watching or is inspired to rewatch. This ongoing column is in the spirit of many past Reverse Shot symposiums, in which writers found connections between seemingly disparate cinematic works, and it will also help us maintain personal connection among our writers and our readers.

Even before the quarantine that began in March, I had been mostly stuck at home since December 2019. This was due to the national strikes that greatly affected FranceŌĆÖs public transportation, hindering commuting. The strikes concerned the reform of the complicated French pension system: railway workers were on the front lines of the protest as the reform would affect their special status, which among other things, involves an earlier retirement age. I had been thus far indifferent about the pension issue (will I even get to live long enough to see a pension?), but the debates this reform provoked grabbed my attention. Issues around increasing the age of retirement raised existential questions: how we decide to live in this world, our relationship to labor, the meaning of autonomy and self-determination, how we spend our time, and who and what owns that time as we age. The proponents of this point in the reform justify it thusly: you live in a wealthy country with a great welfare system, life expectancy has increased, and so you should work longer. As humans are made only to feel valuable as long as we are productive, this reform project also illuminates our coming expendability, the government discourse preparing us to think of retired people as a burden.

When the strikes died down, we only had experienced a few weeks of ŌĆ£respiteŌĆØ before the pandemic hit, touching primarily the elderly. The coincidence between these events, the reform and the pandemic, reveals a social carelessness exemplified by the deplorable state of nursing homes or the methodical governmental sabotage of our public hospitals. The future, already in doubt because of the ecological crisis and the inevitability of more pandemics, does not compel me to look ahead fondly.

Recently, I found comfort and enlightenment in the work of Senegalese auteur Djibril Diop Mamb├®ty, who among many other things, made films featuring older female characters. After participating in a Q&A following a recent online screening of his masterpiece Hyenas (1992), I introduced a film program during the Seytou Festival that included a new restoration of Diop Mamb├®tyŌĆÖs 1989 documentary LetŌĆÖs Talk, Grandmother, which recounts the laborious shooting of Yaaba (1989), the late Burkinab├® director Idrissa Ou├®draogoŌĆÖs second feature. Yaaba tells the story of Bila, a young boy who lives in a village in Burkina Faso, and his friendship with Sanaa, the titular Yaaba (meaning ŌĆ£grandmotherŌĆØ in Moor├®), an old woman who was run from the village when she was suspected of witchcraft.

One can understand what drew the filmmaker to this story, as he has always given prominence to Senegalese societyŌĆÖs marginalized, as can also be seen in Touki Bouki (1973), with its two lovers who desire to escape their reality, and The Little Girl Who Sold the Sun (1999), with its disabled adolescent making her way through the streets of Dakar. Sanaa/Yaaba recalls Lingere RamatouŌĆÖs Hyenas character, the vengeful and wealthy old woman who returns to her village of Colobane in Senegal to sow chaos among the inhabitants who wronged her in her youth. In these films, old age is synonymous with knowledge and wisdom (Yaaba) or accumulated wealth and cosmic power (Hyenas). The generative feeling of revenge that powers Linguere Ramatou paradoxically gives new life to the desolate town of Colobane, while SanaaŌĆÖs intuitive resourcefulness helps her cure a young girl in the village.

While todayŌĆÖs crises stifle my capacity to imagine an older version of myself not characterized by helplessness, these two figures stand as possibilities. Under Djibril Diop Mamb├®tyŌĆÖs tender gaze, old age is not the endŌĆöone can still hold onto a certain power whether through wisdom or more mystical means. For Linguere Ramatou and Sanaa, there are still conflicts to be resolved, justice to be sought, and ancestral knowledge to pass on to new generations. ŌĆöFanta Sylla

No other period of my life has made money feel more notional, or more cold-blooded. Before lockdown, New Yorkers quipped that you could step outside and, in a heartbeat, find $50 gone. Passive voice intended. Modern cities gridded around shops instead of public spaces coax us slyly into consumption, sapping our dollars in reflexive exchanges for rest or communion, exchanges the underpaid and unhoused must weigh in minute, ceaseless calculations. Then, for a spell, everything shuttered. Forced inside, I felt fortunate to see enough of what I needed and, without an outside world to wheedle me into wanting just for wanting's sake, my desires dulled. I still yearnŌĆösometimes I go so far as to getŌĆöbut among my needs I had mislaid some wants; meanwhile, online, bail funds and GoFundMes and mutual-aid groups and COVID-19 counts amplify how clamorously some need and how tenuous our shared survival always already was.

None can evade dependence, not from our first breath. Fanta, your talk of the protests in France concerning pensionsŌĆöand the shaky fates of those who have aged out of ready work but not needing or wantingŌĆöput me in mind of director Mikio Naruse, whose women so often scramble to outlast their glamour, at least in the eyes of men with leisure enough for desire and the funds to spare. Of the Djibril Diop Mamb├®ty films you traced, I've only seen Touki Bouki and Hyenas, and I remember the second thusly: scarred long ago by a man's deceit, an old woman cleaves to her wealth, whose power she wields over lapsed friends and lovers, reshaping their community with a ruthlessness we cannot quite scorn because her ache is real. She breeds horrors, yes, but she's also born from them and bears their indelible mark.

Nearly four decades prior, in Late Chrysanthemums (1954), Naruse limned a kindred figure: a retired geisha turned landlord and moneylender called Kin (Haruko Sugimura), whose chief clientele are her onetime okiya colleagues, Tomi (Yuko Mochizuki), Tamae (Chikako Hosokawa), and Nobu (Sadako Sawamura), as well as past patrons and bedmates, all of whom suffer the lingering hungers and chastened hopes of postwar Japan. Money is on everyone's lips, though no one seems to have any. If geisha are consummate artists of a feminine idealŌĆöShimada coiffure, snow-white hands unmarred by labor, samisen plucked delicatelyŌĆöthen time and struggle puncture the illusion. Tomi and Tamae, mothers of adult children sans fathers, toil away as cleaning women; Nobu stands tirelessly behind a restaurant counter. Everywhere lurk reminders of just how bad it can get: a blind beggar seeking alms, an eager boy peddling sweets, an old woman hawking heirlooms for her ailing husband.

Kin, for her part, spends her days collecting a litany of debts. As in Hyenas, an avarice activated by off-screen trauma mutates into mania. You spoke of parasites; Kin herself says, to justify her tightfistedness toward a former inamorato who once, significantly, slit her throat in a failed murder-suicide, ŌĆ£All men feed on women's blood. I have to protect myself.ŌĆØ How easy it is to forget a vampire's bite awakens another vampire. ŌĆ£She was a warm-blooded human back then,ŌĆØ scoffs Tomi of when Kin was younger, more passionate. WhatŌĆÖs a woman to do when she dies, and then lives?

For my money, NaruseŌĆÖs films cut deepest when would-be climaxes lengthen into purgatory, the plodding, aimless path stretching nowhere. Interwoven from a handful of short stories by Fumiko Hayashi, a recurrent Naruse collaborator and perhaps the cause for many of his women characters' rigorous contours, the narrative of Late Chrysanthemums is all slope, the sheer face of a cliffŌĆönot the March buds blooming recklessly, nor the wildfires of August, but the creeping October chill, curling the petals downward until they fall. What slight dramas inflect the narrative (a daughter's elopement, a dissipated ex-lover's pathetic return) are merely ripples on the water. Time passes, that's all. When Kin asks scornfully what her friends are doing with their lives, Tamae replies: "What you see." She is pouring tea.

It reveals nothing to say the film's final image is of Kin rummaging frantically for a ticket; without it, she cannot pass beyond a barrier. For one fugitive moment, she is as adrift as everyone else, as anxious over her own future. Such a thin edge of the knife would trouble anyone. ŌĆöCourtney Duckworth 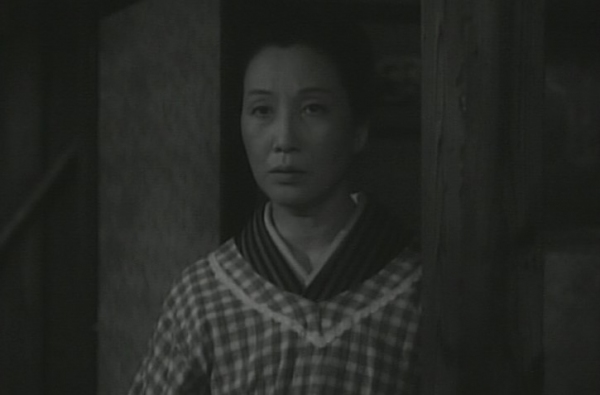